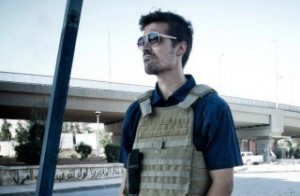 Being a journalist covering stories overseas has never been more deadly. Context: In 2015, the number of journalist fatalities has risen to 110, an increase of 46 deaths in the community since the year before (a 40 percent increase).

Believe it or not, there was once a time journalists were considered off-limits on or near the battlefield in terms of targeting, kidnapping or both. Over the course of the Vietnam War (10 years), for example, the total amount of reporters killed there was 63, or slightly above six per year. During World War 2 –the most deadly conflict in history — the number was 54. Iraq War (2003-2013): 150 (an average of 15 per year). So why the rise in fatalities? Social media is seen as a huge reason, as a captured member of the press is no longer needed to advance a message on the propaganda front. As we’ve seen with ISIS, Twitter can become its own broadcast studio — and an unfiltered one at that — to send whatever content it deems necessary to the masses at a time and place of its choosing.

“It used to be that when media wore PRESS emblazoned on their vest, or PRESS or MEDIA was on their vehicle, it gave them a degree of protection” because reporters were seen as independent civilians telling the story of the conflict,” Gary Pruitt, president of the Associated Press, explained earlier this year at the Hong Kong Foreign Correspondents’ Club earlier this year. “But guess what: That labeling now is more likely to make them a target.”

“They don’t need us, they don’t want us. They want to tell their story in their way from start to finish with nothing in between, and a journalist is a potential critical filter that they don’t want to have around,” he continued. “A beheading becomes a bloody press release.”

The AP has lost three journalists this year (one in Afghanistan, two in Gaza).

The numbers this year also extend beyond those considered to be “professional” journalists. Of the 110 deaths, 27 non-professional ‘citizen’ journalists were also killed. This number includes four Bangladeshi bloggers hacked to death by a branch of Al-Qaeda for simply advocating “tolerance, free speech and freedom.”

The grim numbers come via Reporters Without Borders, a non-profit organization now in its 30th year of existence. What makes this increase both disturbing and odd is this: In 43 fatalities this year, explanations behind those deaths remain unclear due to a “lack of thorough and impartial official investigations, the lack of good faith on the part of governments, or the difficulty of investigating in unstable or lawless regions.” In other words, investigations couldn’t even be launched because the areas each occurred in are too dangerous to even enter. Context: Of the 66 deaths that occurred in 2014, there were no such fatalities that fell into this category.

Another odd fact: Not surprisingly, Syria tops the list of the most dangerous place for journalists to work. Also at the top of that list: France, a country at peace (the Charlie Hebdo massacre earlier this year largely fueled this distinction, when eight journalists were gunned down). In total, RWB reports two-thirds of journalist deaths occurred in countries deemed peaceful. Last year, two-thirds happened in countries considered to be at war.

Pruitt is calling on creating a new protocol to the Geneva Conventions to make the killing of a journalist a specific war crime. It’s a noble effort and at least a start, but hardly a deterrent considering enemies like ISIS don’t seem to worry much about ramifications of anything, including their own deaths if it means successfully carrying out jihad.

There was once a time the war press was afforded a level of protection on the battlefield and otherwise. Those days are long gone. As the beheadings of James Foley, Steven Sotloff and others in the community have illustrated, journalists are now as much a prize as soldiers themselves. And the sad thing is, it appears very little can be done about this disturbing, deadly and rapidly increasing trend in an increasingly dangerous world.