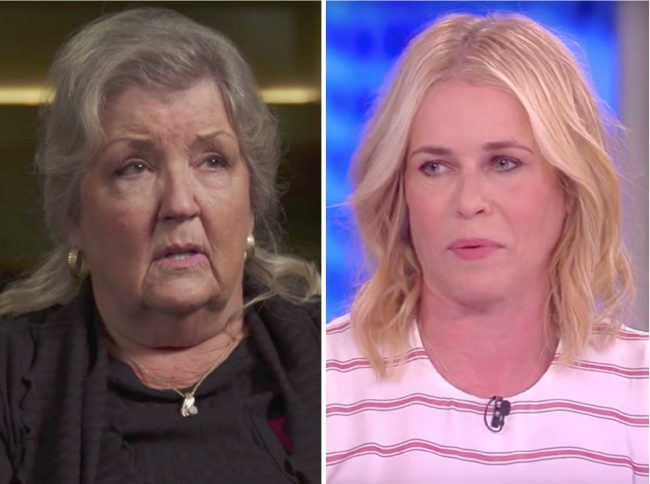 As a wave of sexual misconduct scandals involving powerful men has rocked the media, political, and entertainment worlds, some allegations of the past are being revisited and viewed in a new light. Among them, the 1978 rape accusation levied by Juanita Broaddrick against former President Bill Clinton. (Notably, MSNBC’s Chris Hayes said that Democrats are overdue for “a real reckoning” on the charges against Clinton.)

One notable progressive, though, is opting to focus on the present day scandal on the other side of the aisle. And Broaddrick is calling her out for it.

In a Tweet on Sunday, comedian Chelsea Handler denounced Roy Moore, the Republican Senate candidate from Alabama, amid reports claiming he tried to initiate relationships with four teenage women while he was in his 30s.

Imagine being molested by an older man. Then that man denies ever doing it and then goes on and gets elected to United States senate. What kind of message does that send to young girls everywhere? And men to all the men who abuse women?

Broaddrick responded by telling Handler “I’m sure you don’t want to go there.”

Yeah, @chelseahandler I can imagine. I was raped by the Arkansas AG who then becomes Governor & President and NBC held my interview explaining the rape until after his impeachment hearing. But I’m sure you don’t want to go there. https://t.co/s9W8NZsaZ3

So far, at least, Broaddrick has apparently been right — as Handler has not yet replied to the Clinton accuser. We will update this post if Handler should respond to her.