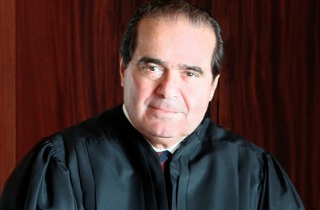 Supreme Court Justice Antonin Scalia predicted in his DOMA dissent that if a federal ban on gay marriage is considered harmful to the rights of gay individuals, then it’s only a matter of time before the same is said of state bans. And people all over the country agreed with him, including a Wisconsin judge who cited Scalia favorably in a ruling striking down the state’s ban on same-sex marriage.

On its face, Windsor does not apply to state law bans on marriage between same-sex couples… However, as noted by Justice Scalia in his dissent, it is difficult to cabin the Court’s reasoning to DOMA only… If anything, the Court’s concerns about the “second-class status” imposed by DOMA on same-sex couples would be more pronounced by a total denial of the right to marry than by the “second-tier” marriages at issue in Windsor that provided state but not federal benefits.

And Crabb is not the first judge to take this kind of jab at Scalia, a Utah judge invoked Scalia in the same manner when deciding to overturn Utah’s ban on gay marriage.