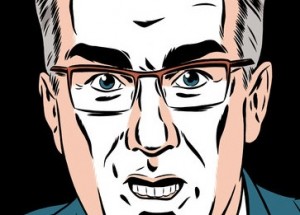 Writing for the paper’s magazine, The New York Times‘ David Carr has today given us an in-depth look into the rise and… we’ll say side-step, not fall… and possible rise once again of everyone’s favorite liberal talking head, Keith Olbermann.

The profile, titled “America’s Favorite Talking Hot Head,” colorfully reiterates a lot of what we’ve already known about Olbermann: He loves to be on camera. He has something of a temper. And he firmly believes his own hype.

But Carr is regarded as one of the most insightful media writers of our age, and is well known for finding the most insightful bon mots that illustrates his subjects true character. In that spirit, we’ve gathered a few of the most illuminating, delightful, horrifying and telling anecdotes and details from the piece for your perusing pleasure:

By all means, please do yourself a favor and read the entire piece on NYT.com.