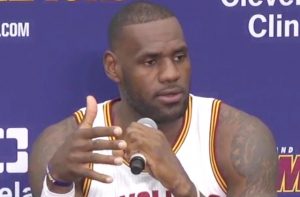 “I don’t believe that Phil Jackson would have used that term if he was doing business with someone else and working with another team,” James said. “Or if he was working with anybody in sports that was owning a team that wasn’t African-American and had a group of guys around (him and) didn’t agree with what they did, I don’t think he would have called them a posse.”

In an ESPN article, Jackson — who coached Michael Jordan to six championships and Kobe Bryant to another five — critcized James for having his business partners; Rich Paul, Maverick Carter, and Randy Mims, along on road trips and breaking away from the rest of his team.

“You can’t hold up the whole team because you and your mom and your posse want to spend an extra night in Cleveland,” Jackson said.

“For me, we see the success that we have, but then there is always someone that lets you know still how far we still have to go as African Americans.” James said.

Carter, a childhood friend of James’s who manages many of his off-the-court business endeavors, tweeted his objection, which included the definition of the word posse.

All the hard work,effort and achievement and @PhilJackson11 still calls us a “posse”every step you take they remind you, you ghetto” @S_C_ pic.twitter.com/OPsPvAvFoM

“I’ve put together a great team,” James said. “I’ve empowered some guys since I was a kid and we’ve all grown together and become one of the people that try to model after, so we’re not going to let Phil Jackson’s comments stop us from doing what we need to do. It just gives us extra motivation. But it’s still sad, though, to see that people at the top always want to try to put guys in power down.”