Lewandowski: I Tried to Call Fields; She Just Wanted to Inject Herself Into Story (UPDATED)
video

Lewandowski: I Tried to Call Fields; She Just Wanted to Inject Herself Into Story (UPDATED) 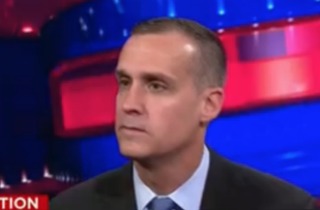 Donald Trump campaign manager Corey Lewandowski appeared on New Day to address the final decision by Florida prosecutors to drop the charges being brought against him by a former Breitbart reporter.

Lewandowski’s actions created a media frenzy weeks ago when he and the Trump campaign battled with Michelle Fields over her account of being roughed up at a press event. While on CNN this morning, Chris Cuomo started things off by asking what Lewandowski’s “level for the personal regret” was with regard to his side’s aggressive smear campaign against Fields, as well as his previous denial of having touched her at all — a fact that was later disputed with video evidence.

Lewandowski said that their three-second encounter “wasn’t memorable” to him, and claimed that he tried to reach out to Fields to clear things up. “To this day,” Lewandowski said, “I have never heard back from Michelle. She wanted to inject herself into making it a story. Now I’m glad the story is over.”

Cuomo also asked about Fields’ claims that she would’ve moved on if she was offered an apology over what happened, to which Lewandowski said that if she wanted to have a conversation, “she should have reached out or called the office directly. That never took place.”

UPDATE: 11:45 A.M. EST Fields responded to Lewandowski’s assertion, and basically said it was another lie.

No. I never heard from Corey. https://t.co/ouFcORtppp