Liberal Compromise on Guns: Arm All the Women

Liberal Compromise on Guns: Arm All the Women 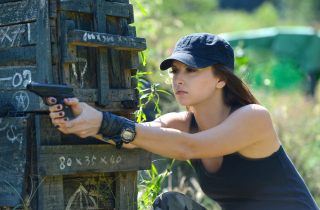 As a liberal who considers himself somewhere to the left of Dennis Kucinich at a hemp rally, I react to each instance of a mass shooting in this country in a predictable fashion: Smelt down all the guns and recycle them into bicycles. Sadly, there are so many thousands of gun deaths a year in this country that one’s outrage can be dulled by the sheer monotony. It’s tempting to throw up your hands and surrender. Fine. Guns have won. Keep your stupid, childish little army man toys. I give up. There’s nothing any of us can do about it.

But something about this latest horror story in Houston from last week, in which a man looking for his wife forced his way into the home of his sister-in-law, then shot her entire family, including five children (one of whom survived), has given me pause.

Whenever something like this happens, you hear from the gun fetishists on the right that it could’ve been prevented had the victims been armed: “The only thing that stops a bad guy with a gun…” the cliché goes. Typically I’d scoff at that as absurd, reductive nonsense — certainly more guns in circulation aren’t going to somehow reduce the number of deaths. That’s like trying to legislate our way around cancer by lowering the price of cigarettes. But this case has me thinking about a compromise. What if we made guns universally legal, but for only half of the population, the ones more likely to be the victims in domestic violence cases like these.

In the often conflicting and convoluted philosophical high-wire act that progressives like myself find ourselves walking, I wonder if my feminist impulses here are finally overpowering my antipathy toward gun rights. Certainly something stronger than restraining orders need to be implemented in order to protect women from men.

Lee Haskell, the man responsible for the massacre in Houston, had been served numerous restraining orders over the years after showing a pattern of violence against his wife. Although there are federal laws in place that prohibit those under protective orders from legally obtaining a gun, the byzantine nature of such laws, which can vary on a state by state basis, provide plenty of wiggle room. This is thanks in no small part, of course, to the persistent efforts of the NRA. There are three bills that would strengthen federal law sitting in Congress at the moment, but, as Mother Jones pointed out, “The current law doesn’t apply to misdemeanant stalkers, domestic-violence misdemeanants who are current or former dating partners but who’ve never cohabitated or had a child together, as well as accused partners subject to a temporary (rather than permanent) restraining order.”

Those are exactly the men we should be most wary of.

The Department of Justice looked at the numbers of homicides over the years from 1980 to 2008, and found that women were much more likely than men to be the victim of intimate killings (63.7%) and sex-related homicides (81.7%), and that they were six times as likely to have been killed by an intimate, such as a husband or boyfriend.

Not that this is necessarily something I feel like joking about, but it brings to mind the Louis C.K. bit about how men are such a threat to women:

“How do women still go out with guys, when you consider the fact that there is no greater threat to women than men?” he said. “We’re the number one threat. To women. Globally and historically, we’re the number one cause of injury and mayhem to women. We’re the worst thing that ever happens to them.”

Almost 20% of women will report being raped at some point in their lives, according to the Center for Disease Control and Prevention. Almost 2/3 of rapes are committed by someone the victim knows, and 73% of sexual assaults are perpetrated by a non-stranger, says RAINN. Many more go unreported.

I never thought I’d say this, but have I backed my way into agreeing with a position taken up by Michelle Malkin? It feels weird to admit, but she may have a point.

Conservative women’s groups have long argued that access to guns makes women safer, as Gayle Trotter of the Independent Women’s Forum testified before Congress last year. “An assault weapon in the hands of a young woman defending her babies in her home becomes a defense weapon,” she said. It was one interesting point in an otherwise silly argument.

Even Jennifer Mascia, who, until recently, had been compiling the list of gun deaths for the New York Times‘ recently-shuttered Gun Report — and knows a thing or two about how common they are (40,000 since she started a year-and-a-half ago) — says she can’t call herself a gun abolitionist altogether either. “I am a single woman living in New York City, and if someone breaks into my apartment while I am home, I am going to want a gun to defend myself. It’s the quickest way to stop someone,” she wrote today on Raw Story.

The NRA has also made passing efforts at vaguely feminist outreach. Natalie Foster, one of their commentators meant to make the case for guns for and to women has said: “If you’re going to be able to choose what you do with your body, then why are we not allowed to choose how we defend our bodies?”

Fine then. Let’s go with that. All women should, in fact, be armed. Where I part ways with the right here, however, is that I think if we’re going to agree to that, then we’ll need to disarm all men. Men, as the DOJ numbers point out, commit 90% of all homicides. As we’ve seen in nearly every sensational mass shooting that’s been in the news in recent years, men are simply far too emotionally unstable to be trusted with such a powerful tool of violence. If we can’t agree to get rid of the guns, then it’s time we put our collective protection in the hands of those who we can likely trust to make more rational decisions about where to point them.