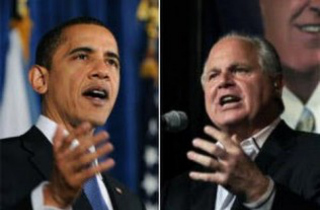 On his radio show this afternoon, Rush Limbaugh reacted to the president’s fourth State of the Union address, ultimately concluding that “there is no relationship whatsoever between Obama’s agenda and the direction of the country.”

Limbaugh’s praise of the speech was not entirely genuine, however. He explained that the post-SOTU focus group show on Fox, featuring Frank Luntz, showed “the very definition of low-information voters” who had the “same reaction” as the positive one he had just laid out before.

“They disagreed with pretty much everything Obama said, policy-wise, but they supported him, and they thought it was a great speech, and they liked the part about everybody working together to get along,” Limbaugh continued, implying that this proves his long-standing point that low-information voters elected the president into a second term, despite the majority of Americans not actually liking his policies.

Limbaugh lamented that the public is quick to conflate the president “addressing” something verbally with actually “fixing” the problem. He specifically cited the president’s passage on health care costs:

He concluded: “But this is way too much information to the low-information voter. You can’t persuade them with that.”