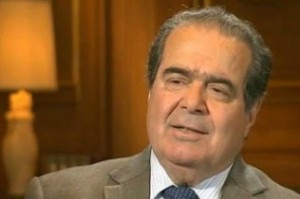 Supreme Court Justice Antonin Scalia did not attend the State of the Union on Tuesday night. Instead, he delivered his own talk where he was asked by National Public Radio’s Nina Totenberg for his thoughts on a number of issues including the modern conventions surrounding the constitutionally-mandated presidential address to Congress regarding the state of the nation. Scalia scoffed at what the State of the Union address has become, calling it a “childish special.”

“It has turned into a childish spectacle. I don’t want to be there to lend dignity to it,” Scalia said with what The Huffington Post described as a “certain amount of mischief.”

Scalia is not the first conservative to express reservations about how the State of the Union address has developed an almost monarchical pageantry.

National Review’s Charles W. Cook said that the State of the Union has grown into something “inappropriate” for a constitutional republic. The format of the address, in which a president addresses two co-equal branchs of government with a tone and style that is anything but humble, has evolved into something the founders would almost certainly be offended by.

“The State of the Union speech is unbecoming of a republic, and, in our media age, what poor arguments once struck in its favor have been dissolved by the ubiquity of the executive,” Cook wrote, after detailing the case against an address to a joint session of Congress first made by Thomas Jefferson. “The State of the Union address should be relegated to writing once again.”