Limbaugh: How Does Obama Understand American Exceptionalism Less Than Putin Does? 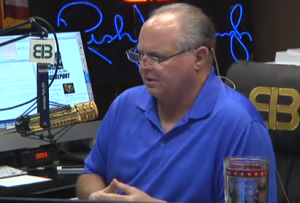 Rush Limbaugh reacted to Vladimir Putin‘s New York Times op-ed by highlighting Putin piling on the concept of American exceptionalism. But as misguided as Putin’s words were, Limbaugh suspected he might at least have a marginally better understanding of the concept than President Obama does.

Putin used the last chunk of his op-ed to go after the idea of American exceptionalism. Here’s what the Russian president had to say:

It is extremely dangerous to encourage people to see themselves as exceptional, whatever the motivation. There are big countries and small countries, rich and poor, those with long democratic traditions and those still finding their way to democracy. Their policies differ, too. We are all different, but when we ask for the Lord’s blessings, we must not forget that God created us equal.

Limbaugh cried, “Of course he would say that, he’s a communist!” But it really bothered him that neither the White House nor “the American left” does not particularly disagree with Putin’s argument, and now the Obama administration “apparently is willing” to be railroaded so Putin can take the claim to moral superiority.

As far as Limbaugh was concerned, the White House got played.

“We’ve got the communist leader of Russia more proudly quoting the Declaration of Independence than our own president does!… Do you people at the White House not know what’s happened here? Vladimir Putin has positioned himself as a mature adult who stopped your immature child from messing around in somebody else’s sandbox that he had no right being in and didn’t know what he was doing.”