Limbaugh On Obama’s Joint Session Request: ‘No Genuine President Would Do This’ 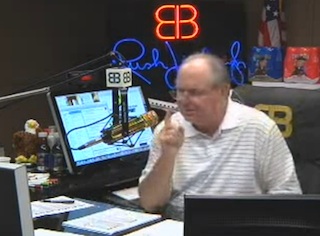 There’s been some anger, particularly in Conservative circles, about President Obama delaying his big jobs speech. Well, today he set a date and now there’s been even more anger, especially in Conservative circles. Why? Because the White House is requesting a joint session of Congress to give it and the date they’ve found where that’s possible is the same as the next GOP presidential debate. Rush Limbaugh is one of those riled up, saying on his radio show today that Obama “is demonstrating exactly what he doesn’t have; class.”

Limbaugh pointed out that John Boehner has the ability to decline the administration’s request and strongly urged the Speaker to do so.

However, Limbaugh admitted that it was easy for him to say no because he won’t have to deal with any of the political fall out that Boehner would. He predicted that Obama, his staff, and his followers were all laughing heartily at this.

In the end of the segment, Limbaugh asked what network the debate was supposed to be on, which network Obama wanted to “screw.” When he was finally told that it was actually MSNBC, he laughed.