‘Loss of Citizenship or Year in Jail’: Trump Incredibly Says Burning Flag ‘Must’ Have Consequences
is this a joke

‘Loss of Citizenship or Year in Jail’: Trump Incredibly Says Burning Flag ‘Must’ Have Consequences 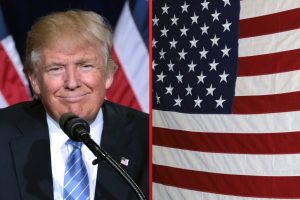 In the newest example of “Jesus Kellyanne can you PLEASE take his phone away?” President-elect Donald J. Trump — who will soon be sworn in as our nation’s 45th Commander in Chief — took to Twitter this morning for one of his more stunning admissions in quite some time.

On the table is the issue of burning the American flag, perhaps in reaction to the news that a handful of college students in Massachusetts burned a flag this week in protest to the election results. Burning the American flag is a Constitutionally protected right under the First Amendment stemming from the SCOTUS 1989 case Texas v. Johnson. The landmark case under Chief Justice William Rehnquist argued that any statute or law that criminalizes the desecration of a venerated object like the American Flag violates a person’s First Amendment privileges as outlined by the Bill of Rights.

Despite the law, our President-elect seems to have different ideas for the future of our country:

Nobody should be allowed to burn the American flag – if they do, there must be consequences – perhaps loss of citizenship or year in jail!

“Nobody should be allowed to burn the American flag,” Trump wrote. “[I]f they do, there must be consequences – perhaps loss of citizenship or year in jail!” The Tweet is at least the first one in a while not to take bizarre aim at CNN, his favorite target as of late.

I had to read the Twitter handle six times to make sure that I was not reading a parody account. Trump will take the Oath of Office in 51 days.