Man Decides to Pull a Cop over, Asks for His ID
video

Man Decides to Pull a Cop over, Asks for His ID 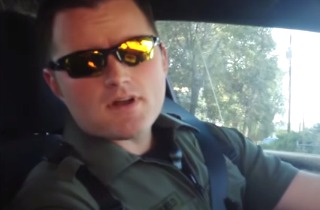 How’s this for a twist? An average citizen decided to pull a Washington state police officer over, asked him a few questions, and even checked his identification. Gavin Seim pulled the cop over for what appeared to be an unmarked sheriff car violation. And the conversation, remarkably, didn’t get as heated as you might think.

Seim asked the officer for some identification to prove who he is. After some hesitation, the officer obliged. He asked if this was some kind of game; Seim responded, “This isn’t a game, it’s called law.”

Seim proceeded to inform the officer that stopping people in an unmarked car is in violation of state law. He advised the officer to take the car back and said, “I know you’re smiling, but we the citizens do have a right to hold you guys accountable. If I’m in open violation of the law, I could call a sheriff out here and demand you be written up for this.”

And considering what Seim was saying to the cop, their conversation was remarkably cordial.

Seim is a very liberty-minded person who explained on his website what he considers problematic here:

Ordinary looking unmarked police cars slink around and entrap, so they can write folks up (read tax) for petty faults. That’s not protecting. As my brother Blake says, “serve and protect, not harass and collect.” — But this is also a major safety issue. Unmarked vehicles are a ripe opportunity for confusion in a citizens reaction and for criminals to impersonate lawful authority to get people to stop.

People have been raped and even murdered because of this, so the law is good sense.