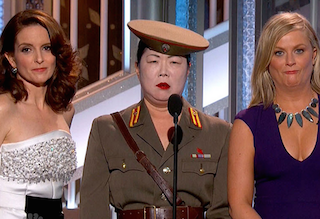 This morning, the comedian, who famously portrayed Kim Jong-il on Fey’s 30 Rock, started responding to the inevitable criticism from those who apparently found her performance “racist.”

I'm of mixed North/South Korean descent – you imprison, starve and brainwash my people you get made fun of by me #hatersgonhate #FreeSpeech

Later, in an interview with BuzzFeed, Cho elaborated:

“I’m of North and South Korean descent, and I do impressions of my family and my work all the time, and this is just another example of that,” she said. “I am from this culture. I am from this tribe. And so I’m able to comment on it.

I can do whatever I want when it comes to Koreans — North Koreans, South Korean. I’m not playing the race card, I’m playing the rice card. I’m the only person in the world, probably, that can make these jokes and not be placed in a labor camp.”

Cho also commented on what she sees as a double-standard when it comes to Asian-American comedy:

“I feel if there’s negativity, it’s other people’s judgments about what they feel that Asian-Americans are allowed to do, really. You’re putting expectations on us that we have to remain Asian-American, that we can’t actually play people from Asia. When we have British people playing American icons, there’s no backlash. But for Asian-Americans, it’s a very particular set of expectations that we are set to maintain, and that in itself is racist.

Watch a clip of the recurring bit below, via NBC: