Matt Damon Did Not Ruin Elysium For Me
column

Matt Damon Did Not Ruin Elysium For Me 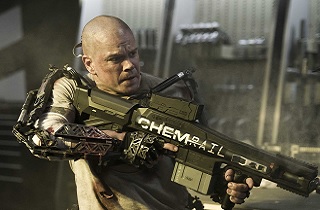 It was the extended trailer for Elysium, which aired during The Killing‘s intense season finale, that cemented my desire to see Neill Blomkamp‘s followup to District 9 right-the-eff-away, so it was with some trepidation that I clicked on Mediaite‘s writeup of Elysium star Matt Damon‘s most recent foray into elite progressive whine. No, Matt Damon, you will not ruin this movie for me, I thought, and a few hours later, Blomkamp’s grittily dazzling, dazzlingly gritty sci-fi cyberpunk masterpiece proved me correct.

Ordinarily, I wouldn’t worry about an actor’s politics ruining a movie for me. Three of my all-time favorite movies star the late Charlton Heston, and I will still laugh at the funniest parts of 30 Rock, but Damon’s remarks seemed deliberately timed, and perfectly attuned, to the task. The  Obama-as-boyfriend thing is nauseating enough when Maureen Dowd does it, so Damon’s comments were akin to a can of Imitation Spam.

Maybe Damon should have watched hi own film, because (SPOILER ALERT) Elysium deals with surveillance, along with a host of other political issues. Aside from its broad themes of inequality, Blomkamp’s film takes direct aim at issues like immigration (Jodi Foster‘s Secretary of Defense implements a comprehensive immigration reform that Joe Arpaio would love), health care, Homeland Security, espionage blowback, and even workplace safety. Unlike the nauseating Avatar, though, Blomkamp doesn’t beat you over the head with his film’s messages, he makes you breathe them in. In Elysium‘s allegory, the surveillance state is just another tool for protecting privilege. It is the consequences of that privilege which form the fulcrum upon which the film rests.

Politics aside, Elysium is a 2-D film that delivers a 3-D buzz. The gritty cyberpunk inventiveness of District 9 is taken to eleven in this film, which finds Damon’s Max in a race against time to reach Elysium, the ginormous space station where future Mitt Romneys live, and where every home is apparently equipped with a “med bed” that can fix whatever is wrong with you. He’s also got a head full of stolen state secrets, which causes Jodi Foster’s Defense Secretary Delacourt to enlist the aid of psychopathic rogue agent Kruger, played to the hilt by District 9‘s Sharlto Copley.

Blomkamp takes full advantage of Elysium‘s $115 million budget, translating the tactile rot and greasy technological milieu of District 9 on an epic scale, and delivering dazzling action sequences that feel absolutely real. If there’s a drawback to Elysium, it’s that it telegraphs many of its emotional beats, which robs it of the surprise and complexity of District 9, but there are two or three gentle grace notes that hit like a two-ton feather.

For all of its ambition, though, Elysium succeeds as a blockbuster action epic, as much Iron Man as it is Iron Man Tetsuo, so even if the film’s messages don’t register for you, the thrills will. That it so effectively puts the problems of our time (and half-measure solutions like Obamacare) in such crystal-clear perspective is gravy that you can leave on the side, if you like.