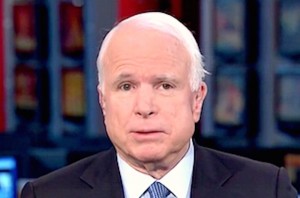 John McCain is not impressed that President-elect Donald Trump is already getting comfortable with Vladimir Putin, warning that could have dire consequences in the Middle East.

Trump made plenty of warm gestures to the Russian president throughout his campaign, and he has been in touch with the Kremlin since his election victory last week. Putin has congratulated Trump and said his win would be good for both of their countries, though McCain believes that trusting Putin is not a good idea:

“We should place as much faith in such statements as any other made by a former KGB agent who has plunged his country into tyranny, murdered his political opponents, invaded his neighbors, threatened America’s allies and attempted to undermine America’s elections.”

Various Republicans have said in the past that American and Russian interests are incompatible, and McCain argued today that Russia was emboldened when the Obama Administration led the last “reset” in their relations. McCain was particularly concerned since Putin is allies with Syrian president Bashar Assad:

“The price of another ‘reset’ would be complicity in Putin and Assad’s butchery of the Syrian people. That is an unacceptable price for a great nation. When America has been at its greatest, it is when we have stood on the side those fighting tyranny. That is where we must stand again.”