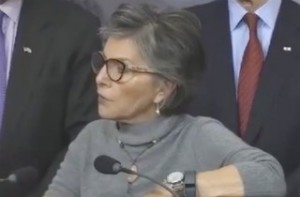 Earlier today, President-elect Donald Trump tweeted out his support of the Electoral College, calling it “genius” while saying it brought smaller states into play. Of course, four years ago, Trump wasn’t nearly as complimentary of it when Republican presidential nominee Mitt Romney lost to Barack Obama, stating that it was a “disaster for a democracy.”

With Hillary Clinton poised to win the popular vote by roughly two million votes based on current projections, representing the second time in 16 years the winner of the popular vote didn’t emerge victorious, Sen. Barbara Boxer (D-CA) is introducing a bill to kill the Electoral College.

The presidency is the only office where you can get more votes & still lose. It's time to end the Electoral College. https://t.co/OXZ9vHaIH1

In her statement announcing the bill, Boxer said the following:

“In my lifetime, I have seen two elections where the winner of the general election did not win the popular vote,” said Senator Boxer. “When all the ballots are counted, Hillary Clinton will have won the popular vote by a margin that could exceed two million votes, and she is on track to have received more votes than any other presidential candidate in history except Barack Obama. This is the only office in the land where you can get more votes and still lose the presidency. The Electoral College is an outdated, undemocratic system that does not reflect our modern society, and it needs to change immediately. Every American should be guaranteed that their vote counts.”

“In 2012, Donald Trump tweeted, ‘The electoral college is a disaster for a democracy,’ ” Boxer added. “I couldn’t agree more. One person, one vote!”

Trump won the election last week due largely to razor-thin victories in states that had typically gone for Democrats. The margin of victory in Wisconsin, Pennsylvania and Michigan totals around 100,000 votes combined. (Michigan has yet to be officially called, but Trump is currently ahead by roughly 12,000 votes.)