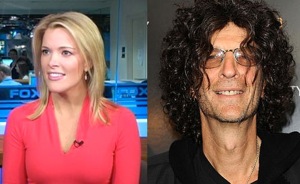 Megyn Kelly is officially “enjoying a moment.” She went on The Howard Stern Show this morning and showed that the shock jock is putty in her hands (not unlike Kelly’s cohort Bill O’Reilly.) In an entertaining interview, Kelly revealed a lot about her rise to prominence at Fox News, discussed the alleged Fox News political litmus test, and spoke candidly how her future at the network almost never was, if not for the foresight of Roger Ailes.

We’ve said it before, we’ll say it again. Megyn Kelly is a badass. Case in point: yesterday she had on some guests to discuss the intellectual property of entertainers, and deftly handled a guest’s mentioning of the sex-toy (called a Sybian.) Its that very verve she brought to the Howard Stern studio this morning.

In the following audio segment pulled for this post, Kelly discusses her personal politics, how she came to be on-air talent for Fox and deflects questions about the size of the “manhood” in her life. Specific highlights:

Cable news insiders will quickly try to figure out which executive initially told Kelly that Fox News wasn’t interested in her (the current number two to Ailes is Bill Shine.) Source close to the Kelly’s hiring have told Mediate that it was likely Kevin Magee, the current president of fledgling sister network Fox Business Network.