Michael Moore: Trump ‘Absolutely Going to be the Republican Candidate’

Michael Moore: Trump ‘Absolutely Going to be the Republican Candidate’ 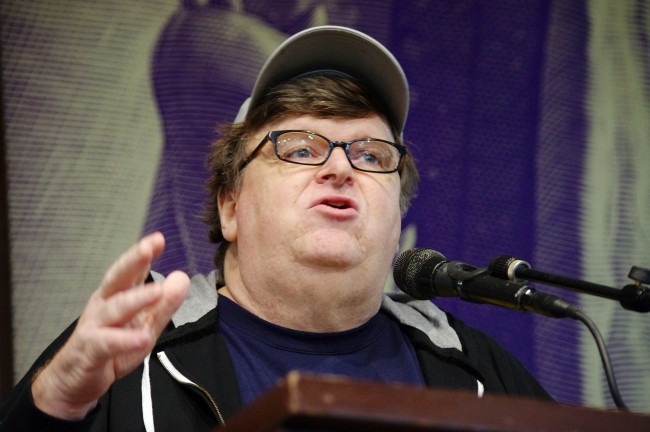 Filmmaker Michael Moore delivered a bold prediction on the Republican nomination, telling Business Insider Donald Trump is “is absolutely going to be the Republican candidate for president of the United States.”

“I think people are feeling more and more that we’ve moved back into a darker time,” Moore said in an interview promoting his upcoming film Where to Invade Next. “Donald Trump is absolutely going to be the Republican candidate for president of the United States. It’s going from being a joke to being a serious reality.”

The filmmaker has been a vocal critic of Trump since the business mogul announced his candidacy in June, declaring Trump “batsh*t crazy” and asking Facebook users to report Trump’s profile as “hate speech.” Last week, Moore protested Trump’s divisive rhetoric outside of Trump Tower holding a sign that read, “We Are All Muslim.”

Moore said Trump’s numbers are so high because they poll likely Republican voters, but added the GOP frontrunner “does quite well” when polled against Democratic candidates Hillary Clinton and Bernie Sanders.

“I think that’s in part because my side of of the political fence is the slacker side of the fence,” Moore said. “That even though statistically there’s no way Trump can win, because he’s alienated those three main groups that make up 81 percent of the country, the difference is his side always shows up to vote. My side, not so much.”

Moore insisted bringing Democrats to the polls relies on “picking the candidate who will mostly inspire women, people of color, and young people to come out and vote,” adding his “biggest concern about Hillary right now is her lack of inspiration.”

“She doesn’t get big crowds,” Moore said. “There’s not a lot of excitement about her. Too many young people see her as the same-old, same-old politics. So she is going to have to have a bit of what Obama had and a bit of what Bernie has if she’s going to be the candidate. I honestly believe that Bernie Sanders could be elected president of the United States. I think people will pour out in droves to elect him and there’s just not enough angry white guys anymore over the age of 35 to put Trump in office.”