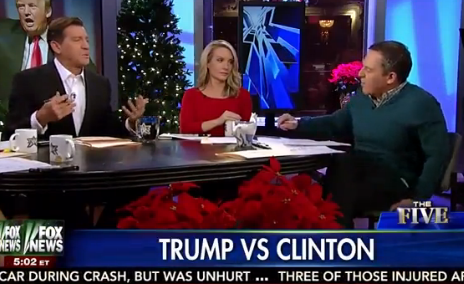 The hosts were discussing comments Donald Trump made about Clinton at a campaign rally Monday, where the Republican candidate insisted Clinton’s bathroom break during the Democratic debate was “too disgusting” to talk about. Trump later said Clinton was “schlonged” by President Barack Obama during the 2008 election.

“I need somebody to Trumpslain this, because I don’t understand it,” Gutfeld told the panel.

Bolling jumped in to clarify where Trump’s remarks were coming from, telling Gutfeld that when Clinton “makes something up as egregious as Donald Trump has now become ISIS’ recruiting tool,” Trump responds “like he does with everyone else.”

Gutfeld went on to point out the hypocrisy that Fox hosts are “not even allowed to use the word that he said” on air, but “somehow we’re going to have him on our network all the time.” He continued to knock “Trumpsplainers,” even as Bolling tried to defend himself.

“Either that Greg, or it’s reporting what’s happened, that’s all,” Bolling said.