‘Misson Accomplished’: Now Michele Bachmann’s Democratic Opponent Has Dropped Out Of The 2014 Race

‘Misson Accomplished’: Now Michele Bachmann’s Democratic Opponent Has Dropped Out Of The 2014 Race 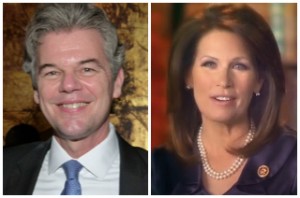 Just two days after Rep. Michele Bachmann (R-MN) announced she will not be seeking a fifth term in Congress next year, the Democrat running for her seat has announced he will be stepping aside as well. Jim Graves told MinnPost‘s Eric Black that with Bachmann out of the picture, he know longer feels the need to pursue the seat in Minnesota’s 6th district.

“Basically, after all that’s gone on, and with Michele Bachmann now stepping down, I’ve been talking to my friends and family and frankly, the feeling is, ‘Mission Accomplished.’ She wasn’t representing the people of the 6th District appropriately, and now she won’t be representing them. There’s no way anyone could run and win who would be worse than Michele Bachmann. So we accomplished that task.”

Graves said he doesn’t know the real reasons for Bachmann’s retirement but said, “Clearly, it was going to be a competitive race. All through Memorial Day weekend, she was in the district, working the crowds. Obviously something happened to cause her to believe that she shouldn’t run again. We’re very happy she dropped out. The country can do better.”

The businessman and founder of the AmericInn hotel chain came close to beating Bachmann in the 2012 race and was apparently gearing up for a rematch that will no longer happen. FiveThirtyEight’s Nate Silver examined the race earlier this week, predicting that the Democrats’ chance of winning the seat dropped from 40% to a dismal 5-10% after Bachmann dropped out. Now, of course, both sides of the race are wide open and those odds could change once more.