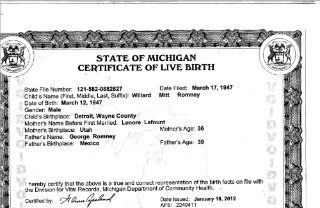 Finally, it looks like we can put that pesky birther issue to rest. No, not the one about President Obama‘s place of birth; I’m talking about the question of whether presumptive Republican nominee Mitt Romney was in fact born in the United States. On Tuesday afternoon, Reuters obtained an official copy of Romney’s certificate of live birth.

Let the record show that Willard Mitt Romney was born in Detroit, Michigan on March 12, 1947. And according to the certificate, Romney’s mother Lenore was born in Utah and his father, former Michigan governor and unsuccessful Republican presidential candidate, George Romney, was born in Mexico.

So as Reuters points out, “on a day when real estate and media mogul Donald Trump was trying to help Mitt Romney by stirring up a new round of questions about whether Democratic President Barack Obama was born in the United States, Romney’s own birth record became a reminder that in the 1968 presidential campaign, his father had faced his own ‘birther’ controversy.”

During his 1968 Republican primary campaign against Richard Nixon, the elder Romney faced questions similar to Obama about his eligibility for the presidency. The difference here, of course, is that Obama’s birth certificate clearly shows he was born in Hawaii. George Romney was undoubtedly born in Mexico, but made a legal claim to being “natural-born” because both of his parents were U.S. citizens at the time of his birth.

It may seem arbitrary for Reuters to request Romney’s birth certificate — no one has actually questioned his citizenship. But the news outlet sees a potential double standard in Trump going after Obama when Romney’s father faced similar questions about his eligibility. In response, Trump’s legal counsel told Reuters, “I don’t think (Trump) has ever thought about Mitt Romney’s father’s birth certificate.” 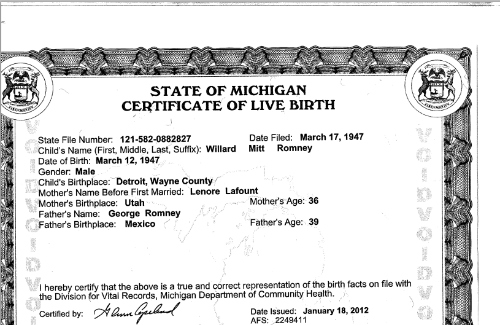