Donald Trump Is Indispensable To Romney Because He Has The One Thing The GOP Needs: Charisma

Donald Trump Is Indispensable To Romney Because He Has The One Thing The GOP Needs: Charisma 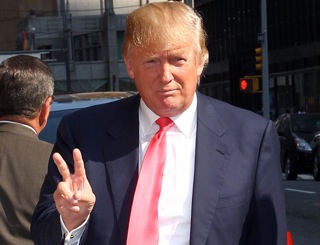 It’s been a banner week for Donald Trump so far. Previously shackled by the media having real news to care about and his own work on outrageously dramatic reality show Celebrity Apprentice (the one he blamed for not running for President himself, but we all know the real culprit was the White House Correspondents Dinner), Trump took about a week after the Apprentice finale to go back to doing what he does best: hijacking the news cycle. This time, he didn’t do much to seek it out, just help his political buddy Mitt Romney out with a fundraiser.

The media, a year removed from the last tidal wave of non-stop Trump coverage, gobbled up his reemergence into the public eye voraciously. They hung on his every nonsense word about the President’s birth certificate, every outlandish superlative about George Will’s (lack of) intelligence. And in doing so, they may have provided the attentive viewer a clear red flag about the sort of people Mitt Romney considers valuable, but for the media and the casual observer who otherwise would not be following the news, he provides a reason to care about Mitt Romney. And if there’s one thing Romney needs to provide the American people right now, it’s a reason to care about Mitt Romney.

There are infinite appropriate metaphors for Romney in relation to the Republican base. He is a salad that needs dressing; a can of tuna without mayonnaise; a pair of tan moccasins; a Bon Iver concert. America, if our obesity rates are anything to go by, is not a nation of salad eaters. Unfortunately for Romney, he does not have the ability to attract a crowd everywhere he goes by the very nature of his being, and it would be naive to assume that it is through a sturdy resumé alone that the modern candidate wins elected office in this country. Ultimately, Romney needs to be adorned in as many shiny objects as possible– any shiny object that hates President Obama will do to get out of the vote.

The only people on the fence at this point about what party to vote for are individuals who likely voted for the President and are dismayed, and as such might be willing to stray. No one actively likes or supports Romney on his own; to paraphrase an Onion article, there is no “raw energy and enthusiasm Mitt Romney stirs inside people.” There are only those who support President Obama and his achievements, and those who hate him. Romney needs to change the game by offering something appealing to the median voter’s palate, something that will make a voter not just think dichotomies about their opinions of President Obama. And since he has very few, if any, votes to lose by placing the spotlight on himself– a feat he has yet to achieve at this point in the cycle– he places himself in little to no risk by using any means necessary to create the appearance of energy around his campaign. Yes, as far as “any means necessary” goes, Trump is a bit of an extreme, but the tactic has a chance.

And the proof is in the pudding. According to television monitoring tool TV Eyes, between Sunday, May 20 and Tuesday, May 22, Romney received 12,439 mentioned on cable news and local television stations. Between Sunday, May 27 (the day Will called Trump a “bloviating ignoramus”) and today, Romney is up to 14,759 mentions, and that’s not counting any of today’s primetime cable news coverage (which hasn’t happened yet). And the reason for this very pronounced difference in coverage between Romney being Romney and Romney when Trump is in the news is not rocket science, but simple, human politics: Mitt Romney is boring. Donald Trump is not. The media would rather not talk about Romney when all they have to work on is Romney’s inherent charisma. And the media, being the fountain of information from which most voters drink, determines in the mind of many casual political observers (read: most voters) who is worth being talked about. And a casual voter will be more likely to vote for a candidate it thinks the media has determined is worth talking about.

Sure, most people don’t seem to really like Trump. The last time anyone bothered to check (April 2011), his public approval ratings were about 20%– in the toilet. For one, the whole “birther” thing is profoundly embarrassing; a quixotic mission worthy of a Nicolas Cage movie. Then there are the general issues many have with Trump. He is loud and crass and off-putting and lowbrow and a walking caricature of what the rest of the world thinks Americans are. He has no shame about who he is in a culture where much of the American left dedicates its existence to forcing people to feel shame over their success. He is the antidote to the malaise of the Occupy movement and his attitude generally allows the average American to think, “if Trump is such a braggart after all the failures in his life, surely I can be one about my successes, too.” And if he is such a perfect caricature of America, that’s because his existence as a spectacle is a uniquely American one. He wears his hair shamelessly and builds gaudy casinos and brags about his beautiful young wife and family in a way that says “I earned it.” There is nothing “Old Money” about Trump in the off-putting way that everything about Romney screams “old money.” As Andrea Tantaros explained today, he “doesn’t come across as snobby.” And for many Americans– for better or worse– that’s enough of a dressing on the arugula salad that is Mitt Romney to be able to chomp it down and leave the house to vote this November.