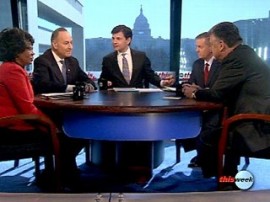 A week or so ago I suggested that the health care debate was a great opportunity for the beleaguered mainstream media — newspapers, network news — to prove “in a slow and deliberate way” it was still relevant.

There is so much disinformation flying around at the moment wouldn’t it be great to have someone in the media who had at their disposal the time and resources, step in and separate fact from fiction. And we mean really separate it in a slow and deliberate way.

Have they managed to do so in the interim? If they have there’s certainly no evidence of it. Howie Kurtz hits the nail on the head in today’s column:

In many ways, news organizations have risen to the occasion; in others they have become agents of distortion. But even when they report the facts, they have had trouble influencing public opinion…Perhaps journalists are no more trusted than politicians these days, or many folks never saw the knockdown stories. But this was a stunning illustration of the traditional media’s impotence.

Emphasis mine. What’s especially scary about this “stunning illustration” is that Kurtz isn’t suggesting the MSM didn’t give Death Panel coverage its best shot; he highlights a slew of occasions where both news anchors and reporters attempted to get the facts out. But to little avail. The death panel phrase is still raging. Details of what the health care bill actually says have yet to permeate the masses. (Could you explain it if you were asked to?) Was it merely too complicated a story to cover properly? Is that even an acceptable excuse? The answer is no.

As noted, Kurtz suggests that many outlets did try to dive in and debunk the rumors. The fact of the matter is that they have clearly failed. The only thing worse than the MSM not devoting the time and space that it should to this story, is the MSM devoting the time and space and not having any influence on the public’s understanding of the issue at hand. If we can’t rely on news institutions to rationally explain the complicated (and extremely important) issues of the day in a way that will reach people, than why do we need them at all? Plummeting ad sales and paid content may be at the core of debate over whether traditional media will survive, but it’s becoming ever more apparent that the death panels are just the latest example of whether traditional media deserves to survive, and it raises the question: if the MSM were to disappear would anyone notice?