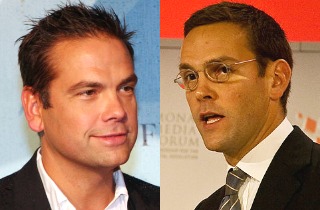 With Rupert Murdoch‘s sons now running things at 21st Century Fox after their dad announced he’s stepping down, the two executives sat down with The Hollywood Reporter to talk about their dad and all things Fox.

Regarding their father’s recent tweet about Ben Carson and President Obama, Lachlan Murdoch said, “I disagree with some of the premise of the question in that while externally people have combined the company with our father’s personal opinions, which are super interesting, or his politics, they’re actually not always the same.”

He and his brother James talk a lot about movies and broadcast TV before getting around to Fox News. There was some reporting on whether Fox News chairman Roger Ailes would continue reporting to the elder Murdoch or not.

The younger Murdochs touted their good relationship with Ailes, but did not provide much detail on that front.

As for the elephant in the room, this is what they had to say about Donald Trump feuding with their network:

JAMES The strongest thought that I had when I saw the beginning of that [Trump’s attacks following the Fox News-hosted GOP debate] was just how awesome Megyn Kelly was.

LACHLAN Yeah, she was great.