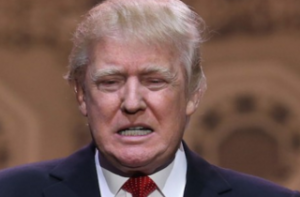 Last night, #NeverTrump started trending on Twitter and shows no real signs of slowing down. The bipartisan effort is almost inspiring, showing that people from all parties, religions, and races really can come together and stand united on an issue. It’s a beautiful Saturday afternoon, so maybe we could all take a second to imagine that this unification is what Donald Trump has been secretly working toward all along. When he called Mexicans rapists, insulted Megyn Kelly, and proposed banning all Muslims from entering the United States, maybe he was really trying to bring people together.

Anyway, here are some tweets!

From a conservative activist:

#NeverTrump because the man openly mocked a disabled reporter. pic.twitter.com/nbxPGwRMsL

From a college-aged conservative:

Why #NeverTrump? This is why. pic.twitter.com/xPlO0pPYko

From a guy named Carlos who feels optimistic:

It’s so nice to see Republicans and Democrats finally agree on something. #NeverTrump

From a CNN contributor:

From a conservative pundit:

Proud to play a role in getting #NeverTrump trending.

From a person in the transportation industry:

Oh, yeah, and from a GOP presidential candidate: