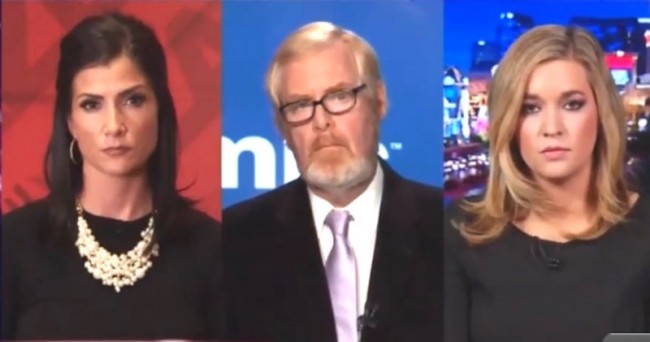 The hubris of the defeated was on full display on The Kelly File last night. And upon witnessing it via DVR this morning, there’s only one word that comes to mind optically when it comes to Megyn’s four conservative guests to kick off the show:

Media Matters. National Review. Polar opposites in terms of ideology. Identical twins when it comes to the narcissism, unlimited ego and an overwhelming feeling of self-importance via — and especially similar on this point — advocacy journalism. Know this: Each publication really believes it will have some kind of meaningful impact on the outcome of their respective Democratic and GOP primaries. And at one time, they may have been true to a certain extent.

To review, Media Matters is an online outlet flaunting its tax-exempt status in its sole goal of protecting and promoting Hillary Clinton via the creepy David Brock. On the conservative side, National Review now joins Media Matters — at least in terms of its effort not so much to endorse and elevate a candidate (although its obviously appears to be Ted Cruz in NR’s case) but in its new — and ultimately fruitless — mission to destroy one in Donald Trump. And it was certainly a sad sight witnessing four of the 22 writers who each published manifestos “Against Trump” on Megyn Kelly’s program last night to argue — in patently-ornery form — that Trump really isn’t what they define as a true conservative.

Before we continue, know this: I’m not the biggest Trump fan either (more of a Kasich/Rubio/Underwood guy), but for different reasons. His lack of depth on issues, maturity and thin-skinned nature makes one question if he has the proper temperament to hold office. So let’s get the personal agenda crap out of the way right now.
Instead, this column will serve to explain why all the old rules have changed around how traditional media can help steer political conversation on a meaningful level. Example: The gang of 22 at National Review seem to believe that if they stack together all of their opinions at once — like an army of conformists out of a John Hughes movie — that an avalanche of snarky prose somehow will be the difference-maker that finally derails Trump.

Yup… have fun what that.

Whether its Glenn Beck, Rich Lowry, Brent Bozell, Dana Loesch or any of the other 18 self-described “conservative thought leaders” (which isn’t pretentious or anything) who believe they have some kind of ownership over how a true, true Reaganite is supposed to act and what he or she is supposed to espouse, the jig is up. Why? Because we suddenly live in a different time now: One that allows the exchange of free thought and communication seamlessly through email, Facebook, Twitter, Instagram, whatever. Old media as a whole simply doesn’t — even remotely — have the influence it once did over the conversation, especially in politics. The voices are so fractured, so niche, so multiplied that its impossible to rise above all the noise anymore like, say, a Cronkite did when declaring Vietnam was lost in that watershed media moment considered to be the PR turning point in the war.

Think about it: The GOP and Democratic frontrunners in Iowa and New Hampshire (Trump and Bernie Sanders) may be night and day in terms of just about everything, but there are more than a few things they share in common: Both were dismissed by the media (including me) before their campaigns even began. Both have extremely loyal followings and easily attract the biggest crowds on the campaign trail. Both are considered authentic and refreshingly candid by the millions who support them. And perhaps most importantly, both don’t depend much on outside money to fund their respective campaigns. As a result, both have spent peanuts compared to their well-funded competitors, with social media proving to be the equalizer for Sanders (which fuels grass roots millennials largely supporting him over Hillary) and free media via ratings-obsessed television outlets for Trump, who generates numbers on an unprecedented level.

And yes, Bernie gets about 1/23rd the amount of airtime Trump does (policy talk, yuk), but has that really hurt him up seeing him up double-digits in Iowa and 27 points in New Hampshire? So as Hillary furiously spends money and practically goes the Trump route in scheduling as many interviews as possible — including phoners now — in an ugly attempt to put Bernie on the defensive (and the more she goes down the road, the bigger a turnoff she becomes), the Vermont Senator stays on message with a discipline nothing short of remarkable given this political climate.

Same goes for Trump, as he’s slammed from all sides: One-dimensional late-night talk show hosts, thought leaders of National Review and well-funded political competitors (like Jeb Bush, whose poll numbers keep dropping with every ad buy he makes). And the more everyone keeps trying to hammer away at his populist popularity while attempting to define him, the more each fails to understand a basic rule of this election season: Trump largely controls the narrative and debate on cable news and big print media. He’s a movement candidate — as Laura Ingraham describes it — in a movement election. He’s Money Mayweather: Impossible to hit while frustrating the hell out of overmatched opponents like the Gerry Cooney of journalism in the form of National Review. Same goes for Sanders: The Clinton machine and her cheerleaders can try to put Humpty Dumpty back together for as long as they wish, but Bernie isn’t going anywhere for a very long time. Another movement candidate in a movement election.

The special sauce? Both are attracting new voters into the fray. If Trump and Sanders somehow end up facing off in the general, it would only be fitting.

The Kelly File welcomed Rich Lowry and his band of pious pundits last night to make their case against Trump. The desperation is apparent, as any influence they once owned is clearly slipping away: You must listen to us! Trump isn’t who you think he is! He isn’t Reagan, dammit! The discussion might as well taken place in Napa Valley or Sonoma…

We keep hearing how the establishment has a plan to bring down Trump. Now National Review is giving it a try while not officially endorsing a solution candidate of its own. It will fail spectacularly. They’re all playing a game they can’t win, yet still display the hubris of the defeated.

Trump may say outlandish, fact-challenged things. Details may be fleeting.

He may not be a true conservative in the eyes of some. Perhaps that aspect isn’t as held as near and dear to voters as the Cruz brigade believes it does. Either way, it’s hard to argue against this analysis: Trump is quite possibly running the most unconventional, yet effective, primary campaign we’ve ever seen… much to the dismay of those who have no ability to control him.