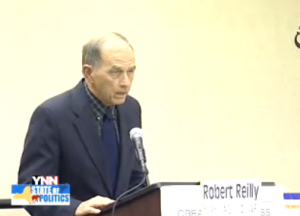 Two nights ago, New York assemblyman Bob Reilly was at a debate and described a meeting he had with a young constituent. As anyone who’s ever watched a political debate for more than five seconds knows, this is a great, time-tested strategy. Reilly then explained that the young man had cerebral palsy. Politically speaking, this should make the story even better. It shows that Reilly relates to people with hardships. Really, there’s no way he could have messed this up. Unless, of course, he decided to imitate the guy, complete with putting on a bad handicapped voice…Which is just what he did. Ouch.

You’ve got to almost feel bad for Reilly here. Watching the clip, it’s clear that he wasn’t trying to do anything bad (besides the obvious politician move of exploiting your constituents’ troubles to show how compassionate you are) by the impression and that his heart was in the right place. It’s just something that you don’t do. I’m sure if the conversation had been with a gay man who had a stereotypical effeminate voice, Reilly would have been smart enough to not throw a lisp into his telling of the story. Why should this be any different?

Really though, this all boils down to something that is offensive to a great many people but probably shouldn’t be. Like a ‘gay voice,’ doing a ‘handicapped voice’ is only offensive to people because bigots have used that voice to make fun of or hurt people for years. If no one had ever made fun of someone with cerebral palsy that way before, then there’d be nothing wrong with Reilly trying to show how the young man sounded. The whole point of his story was that the guy had bad medical problems and the voice was simply to further depict that. Unfortunately, we live in a world where people constantly wield fake ‘retarded voices’ or ‘faux ebonics’ as a way to hold other people down so you just can’t go up onstage and do the same thing even if you mean it without condescension.

Well, you can, but people are going to be up in arms on radio shows and your opponent will instantly be forwarding the YouTube video clip to everyone in the universe. At the very least, Reilly made a terrible judgment call.

What do you guys think? Is this a true offense or an overblown scandal.