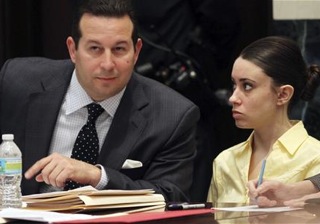 With all of the jurors involved in the Casey Anthony case keeping silent, her defense team is taking the brunt of the national backlash, and only helping to stoke the fires. But while lead attorneys Jose Baez and Cheney Mason have certainly participated in plenty of questionable behavior, the New York Post may have pulled the trigger too soon calling the legal team “gross” for dining out tonight.

The “gross” tag did not appear in the Post‘s article, but was affixed to the tweet leading to a story about how the legal team was “partying” at the restaurant they had made their usual throughout the trial while footage of the trial played behind them. The comments from users on the story seemed to echo that sentiment:

“Celebrating? What an unconscionable bunch of douche bags…”

“The devil is dancing in the pale moon light.”

“I was appalled by what I saw. The attorney, can’t remember her name, but the blond/reddish haired one sitting with Casey thru the trial had the nerve to be dancing in the bar… really, really… there is a dead child in a swamp and you dance because the killer tot mom got off. REALLY?”

“That’s f*cking horrendous. No Justice for the baby. America has let her down.”

That post goes on to link to a local Orlando report showing members of the legal team– both prominent and not– dining and celebrating. That video is below:

The outrage triggered by any images of individuals being happy about any part of this case is natural– after all, a toddler is dead, and someone got away with killing her. That doesn’t necessarily make the defense team diabolical for celebrating the greatest success of their legal careers. The attack from the Post‘s Twitter and the numerous “dancing on Caylee’s grave” comments waiting to happen depend upon the average consumer of Casey Anthony news to take away only the most superficial understanding of what a legal team constitutes.

Given the press coverage he was getting for his closing arguments, there’s an argument for Jose Baez being the David Vitter of his field– he seems to do everything wrong and still keeps winning. And the best most incompetent lawyer in America’s sidekick, Cheney Mason, who will forever be remembered as the guy who gave the media the middle finger, doesn’t do much to help the legal team’s PR either. But forgotten before the cameras and in the pages of our papers are a number of decent, hard-working associates who spent countless sleepless nights working on excruciatingly detailed legal briefs while their bosses hogged the limelight.

Anyone who has written a legal brief– or even a shorter legal memo– can tell you it ranks somewhere between mononucleosis and an eight-hour Keith Olbermann “Special Comment” on the Scale of Pleasant Experiences. It’s the hardest of hard labor, and given the revulsion with which most Americans view lawyers, among the most unsung. What’s more, associates may choose their firms, but not their cases– they toil on improving whatever life walks into their boss’ office at any cost. If Baez’s words after the verdict– “I saved a life today”– are taken at face value, the least the little people at his office deserve is a nice dinner at a location which they appeared to have made a second home out of. They probably did far more for Casey Anthony– and for the American justice system– than the people that get to speak at press conferences for them. And think what you will of the verdict, there’s nothing “gross” about a long day in the office.