Even Ahmadinejad’s Anti-Nuke Comments Are Offensive: ‘Bombs Are For Retarded People’ 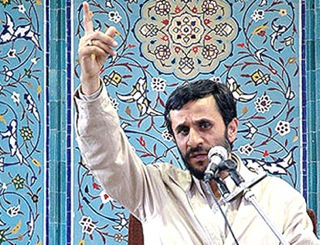 Sometimes it takes an outrageous comment from a foreign leader to remind Americans of how advanced our capacity for empathy has become. To many in the West, it may come as a surprise that Iranian President (and, for all purposes, dictator) Mahmoud Ahmadinejad has angered many of the country’s powers-that-be for being too “liberal,” especially given that his “liberal” comments now include blasting those who promote the ownership of nuclear weapons as “retarded people.”

Ahmadinejad has always maintained to the global community that Iran’s nuclear program has been strictly one of peace, and in a speech today, he reasserted his position against nuclear weapons, decrying the West for its fear in “Iran’s ability and determination that drove us into this (nuclear) path.” In his asserting that Iran has no use for weapons, he disparaged them by saying “bombs are for retarded people.” The sentiment is good news for the West– and coupled with the recent controversy in which Ahmadinejad has embroiled himself, defending the rights of women to attend colleges with men, almost a sign that his positions may be evolving into something resembling moderate as far as Iranian leaders are concerned– or, as some of the religious leaders opposing him have argued, a liberal radical. Meanwhile, in the West, the use of such deplorable slurs as “sweetie” could force a world leader into a humbling apology.

In light of the comment, the Atlantic Wire compiled a quick “greatest hits” for the Iranian leader, which serves as a reminder that he is only beginning to sound moderate compared to the off-the-charts radicals that think a leader who wants to “eliminate” Israel and denies the existence of Iranian LGBT people is too liberal. It appears that, like gays, “retarded people” also do not exist in Ahmadinejad’s Iran– or, if they do, don’t merit to be treated with any fundamental human respect, but merely as props in speeches meant to appease that meddling Free World. But hey, baby steps– it seems Ahmadinejad has at least recognized women as somewhat human.