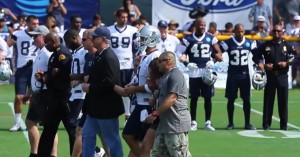 The Dallas Cowboys have been denied permission by the NFL to wear a helmet decal honoring the Dallas Police Department and the city as a whole — in the wake of the July ambush on officers in downtown Dallas.

The Dallas Morning News reported Wednesday that the league permitted the decals in training camp and practice, but rejected the Cowboys’ request to wear them during preseason and regular season games.

“Everyone has to be uniform with the league and the other 31 teams,” said Cowboys executive vice president Stephen Jones, son of owner Jerry Jones. “We respect their decision.”

Earlier in training camp, the Morning News quotes Stephen Jones as saying this:

There are so many wonderful, wonderful causes, the league has to be careful…If you allow one, then what do you do about every team that has a great reason to have something on their helmets?…There are tons of things out there that need to be recognized. Once you open that Pandora’s box, how do you ever stop?

But Pandora’s box has already been opened. The NFL allowed the New York Jets, New York Giants, and New England Patriots to wear a decal honoring the victims of the tragedy in Newtown in 2012. And they allowed the Pittsburgh Steelers to wear one honoring their legendary head coach Chuck Noll in 2014.

The Cowboys, sans decals, will open the preseason on Saturday against the Los Angeles Rams.