No, George Zimmerman Did Not Sell a Painting of Trayvon Martin for $30K 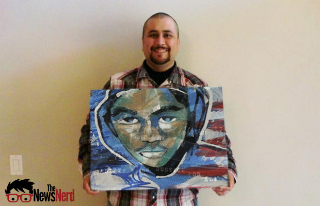 It’s often said that the best lies contain just enough of the truth to make them believable. That probably explains why I’ve seen so many people falling for the latest viral hoax from a “satirical” site called The News Nerd.

It’s an image of George Zimmerman proudly displaying a painting he made of Trayvon Martin set against the backdrop of an American flag and the words “God one nation with liberty and justice for all.” As you’ll be able to surmise, being a person in possession of the most basic of media literacy skills, this is a obviously a Photoshopped fake. Unfortunately, there seem to be fewer and fewer of those sorts of people left out there in the land of social-shame sharing.

“This is disgusting”, “I’m sickened by this,” and so on, is how most of the people sharing the news that he sold the painting for $30,000 have presented it. It is sickening, but not for the reasons they mean.

Granted, had Zimemrman in fact made such a painting, then, yes, it would be one of the most egregiously offensive things I can imagine. That’s the reason why we share a story like this in the first place, as, unfortunately, I’ve had to say over and over again about these types of hoaxes. We want them to be true so badly, to confirm something we believe, or to bolster our sense of outrage, or to serve as a point of contrast to our tidy understanding of how things should be, that we skip the crucial step in figuring out if it’s actually real or not. And once confronted with the hoax, we dismiss the revelation as a triviality. I’ve seen dozens of people react to the debunking here with something along the lines of, “well, it’s close enough.”

-RELATED: Did Zimmerman Copy a Stock Photo for His ‘Original’ $100k Painting?

Even worse, in this case, is how unnecessary the invention even is. Zimmerman has, in fact, been attempting to cash in on his infamy. Back in December, CNN reported that bids on a piece he had made, with the same text as the supposed Martin painting, had topped $100,000.

“Everyone has been asking what I have been doing with myself. I found a creative, way to express myself, my emotions and the symbols that represent my experiences,” the description of the painting on Ebay read. “My art work allows me to reflect, providing a therapeutic outlet and allows me to remain indoors.”

Not complaining about that last part there.

As if that wasn’t bad enough, he even did a painting of one of the people involved in his case, Florida attorney Angela Corey, who prosecuted him in the shooting death of Martin. The AP filed a cease-and-desist, claiming the work was a copy of one of their photos.

The point is, the actual things Zimmerman has done are bad enough, we don’t need to make new ones up in order to shuffle our outrage back into a new news cycle. Every time we fall for something that seems just real enough to believe, we drift further away from the truth, in both the specific story at hand, and as an overarching concept in general.

[Featured image via The News Nerd]