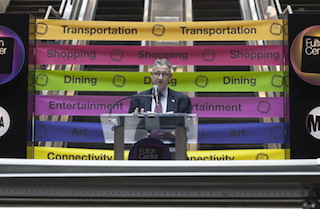 “I hope I’ll be vindicated,” he said Thursday as prosecutors seized almost $4 million from him.

Silver, a Lower East Side Democrat who’s been speaker for over 20 years, is accused by federal prosecutors of “using the power and influence of his official position to obtain for himself millions of dollars of bribes and kickbacks masked as legitimate income.”

The complaint maintains that for more than a decade, Mr. Silver devised a scheme “to induce real estate developers with business before the state” to use a real estate law firm controlled by a lawyer who had once worked as Mr. Silver’s counsel who orchestrated payments to the speaker for referrals to the firm.

After news of the arrest at least one Democratic senator tweeted that Silver should resign, though whether he was referring to Silver’s leadership position or his seat was unclear: