It Was ‘a Mistake’: Obama Reacts to Congress Overturning His Veto on 9/11 Bill 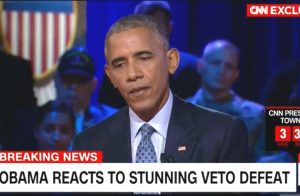 President Barack Obama expressed his disappointment on Wednesday with Congress, which voted overwhelmingly to overturn his presidential veto on a bill that would allow families of terrorist victims to sue foreign nations.

The Justice Against Sponsors of Terrorism Act (JASTA) will allow the families of 9/11 victims to seek restitution by suing Saudi Arabia, where the vast majority of the hijackers hailed from. It passed Congress unanimously, but Obama had expressed his intention to veto it, which he did on Friday.

The Senate voted Wednesday 97-1 to override Obama’s veto, and the House voted likewise 348-77, effectively passing the bill into law. It was the first time Congress overturned a presidential veto during the Obama presidency.

White House Press Secretary Josh Earnest said it was the “single most embarrassing thing the Senate has done.”

RELATED: Legal analysis of JASTA from our sister site LawNewz.

“I think it was a mistake, and I understand why it happened,” Obama told CNN’s Jake Tapper. “Obviously all of us still carry the scars and trauma of 9/11,” and he pointed to the resources that existed to support the families.

Obama repeated his criticism of the bill: He argued that it eliminated the notion of “sovereign immunity” and put Americans abroad at risk for reciprocal action by exposing them to private law suits in other countries.

“It’s a dangerous precedent and it’s an example why sometimes you have to do what’s hard,” Obama said. “And frankly I wish Congress here had done what’s hard. I didn’t expect it, because if you’re perceived as voting against 9/11 families right before an election, not surprisingly, that’s a vote for people to take. But it would have been the right thing to do.”