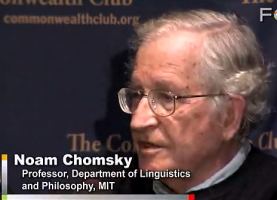 Add Noam Chomsky to the growing list of people using the Nazi analogy lately. Speaking to the Commonwealth Club in San Francisco, he alluded to right-wing media as “substantive content — crazy content, but it does give answers,” and warned that if Americans weren’t properly educated about what was really happening to them, they could be in for a repeat of the Nazi takeover of Germany in the 1930s.

Chomsky, an influential linguist and liberal activist, did give himself some wiggle room — he prefaced his comments by saying “I don’t want to press the analogy too hard,” and later repeated that the analogy wasn’t a perfect one. But it was provocative stuff, and veered into Godwin’s Law territory. Chomsky singled out Rush Limbaugh and Michael Savage as dealers of dangerous rhetoric, but he didn’t call out any cablers by name, although they seemed to be swept up in his critique of right-wing media:

The memory that comes to my mind — I don’t want to press the analogy too hard, but I think it’s worth thinking about — is late Weimar Germany. There were people with real grievances, and the Nazis gave them an answer. ‘It’s the fault of the Jews and the Bolsheviks and we’ve got to protect ourselves from them, and that will take care of them.’ And you know what happened…

[…]Germany in the 1920s was at the peak of Western civilization. A decade later, it was at the pits of human history.

Unless an answer can be given to these people, unless they can be led to understand what’s really happening to them, we could be in for trouble.

The full video below: