One Explanation For Midterm Results? Oldsters Outvoted Youngsters—By A Lot 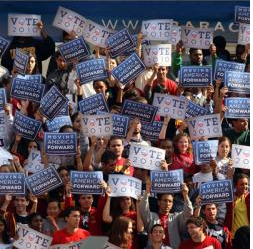 The New Republic’s Jonathan Chait joins the ranks of reporters posting midterm post-mortems this morning, with a piece that offers a simple explanation for why the elections turned out the way they did. Chait says that turnout yesterday was “disproportionately old and white,” which explains why the GOP swept the House and nearly wrested control of the Senate:

The exit polls from today’s election show how this happened. The non-white share of the electorate fell from 24% in 2008 to 19% in 2010. But the age gap is the real tidal shift. In 2008, Republicans won voters over 65 years old by 8 points, but were crushed among voters under 30 by more than 30 points. The under 30 vote outnumbered the over 65 vote.

A huge portion of what happened in this election, then, reflects the fact that Obama won with a coalition unusually dependent upon the young, and that he failed to turn these sporadic voters into regular voters. Democrats’ strength among the young bodes well for them in the long run, but as Keynes famously said, in the long run we’re all dead. In the short term, Republicans are back in command of the House. And Democrats will probably continue to struggle disproportionately in midterm elections.

Though Chait’s point doesn’t really come as a surprise, the numbers he cites are pretty incredible. Still, it seems premature to conclude that Obama “failed” to turn young voters into regular voters, based purely on one election. Maybe the turnout in 2010 will be the true measure of whether the President has lost his young base.