Online Statistics Guru: Computers Are The Sports Reporters Of The Future

Online Statistics Guru: Computers Are The Sports Reporters Of The Future 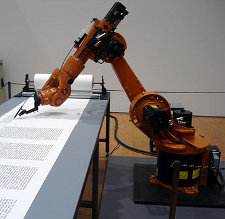 Good news! Robbie Allen of the excellent sports statistics site statsheet.com thinks he might have tapped into the wave of the future in sports journalism. Bad news! The wave of the future involves computers doing the work of humans. Yes, that’s right, Allen is working on a system to generate “completely automated sports content,” which will be packaged in blog posts – posts he wants readers to believe were created by humans. But before you frantically head down to your bunker and await the human vs. robot apocalypse, let Allen explain.

One of the nice attributes of algorithmic content is that it can be improved over time. A blogger/writer’s internal script is pretty much set. They generally don’t change or improve the quality or comprehensiveness of their content over time in a significant way, but algorithms can be upgraded continuously. The “voice” of the content can be improved.

Point: computers. But before you offer yourself as a human sacrifice in the name of our new machine dictators, know that Allen isn’t phasing humans out of the sportswriting equation just yet.

Will automated content be the end of sports journalism or blogging? Definitely not. There are always multiple sides to every story. And of course there are some categories of news (e.g. breaking news stories) that can’t be easily automated. I’d like to see an algorithm write a story about Tiger Wood’s [sic] infidelities!

Of course, he is correct. Opinion columns also might be tough for a computer, and opinions are at the heart of why anyone cares about sports in the first place, so maybe humans will survive automated content after all. ReadWriteWeb’s Marshall Kirkpatrick got some additional thoughts from Allen on the project:

Even if at any given moment a human can generally beat a machine writer, “in many ways this going to surpass a lot of the sports media that is out there,” Allen says. “There are going to be times that any writer can outperform a computer, but when you look at the breadth it’s going to be hard to beat a computer.”

Newspapers would agree. And Allen noted a project at Northwestern University is already attempting something similar, creating automated accounts of games based on box scores. But Allen is taking the next step:

He says he plans on offering a variety of writing voices to interpret the facts of a game in. Readers or publications could choose between the “over the top” vs the “subtle” coverage, for example, depending on their tastes.

There’s all kinds of artistic and ethical ways to consider this vision. Will Google punish these non-human content creators? Should it? If a reporter breaks a news scoop, is its engineer responsible for making sure it protects its sources? How will an athlete feel when they graduate from a minor sports league covered by machine media into the big time and a human sports reporter’s beat? “They may be disappointed,” Allen quips, “because the coverage may not be as good.”

We might be tempted to call this a low blow to us humans if this whole project were less awesome-sounding. And Allen makes the possibilities of computerized reporting seem virtually endless:

I’m not talking just a “stat of the day” or game recaps, but a lot more. I’ve identified 21 different types of sports stories that can be automated…Large sports media companies can’t cover every team to the level they cover the most popular teams. But algorithms don’t care about the size of your market. I can generate content that is just as in-depth for North Dakota State as I can Duke. Automated content will be a boon for smaller markets.

For all their amazing ability to store and process data, their ability to connect people around the world and transform the possibilities of human interaction – if computers could help make Duke basketball coverage less ubiquitous, in the eyes of the non-Duke-fan public, it might be their most powerful tool of all.