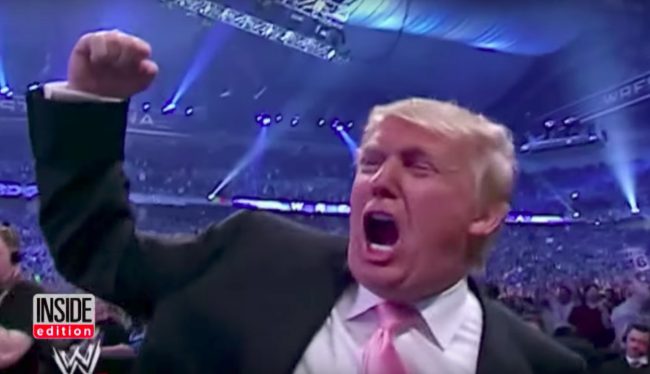 On Sunday, President Donald Trump — leader of the free world and guardian of the largest nuclear stockpile on Earth — decided to tweet a silly video of himself “punching” WWE chief Vince McMahon with a CNN logo imposed over McMahon’s face. The tweet was sent forth from Trump’s own @RealDonaldTrump account as well as the official @POTUS ensuring that future generations will be able to peruse it from the Donald Trump Presidential library.

Was it stupid? Yes. Was it detrimental to Trump’s legislative goals? Probably. Was it anything we haven’t seen before? Not really.

On that last point, the media should take a cue. It’s bad enough covering Trump’s daily Twitter frivolity at the expense of real issues, but indulging in an endless feedback loop of overwrought hysteria over Trump promoting “violence” or any other outlandish claims will only undermine all of our credibility to cover the issues going forward.

Going beyond the insanity of the president’s overall behavior — hardly a fresh story — every storyline undergirding the tweet’s relevance to the national conversation has been painfully contrived.

Maybe it will incite violence, as Morning Joe regular Eddie Glaude Jr. suggested on MSNBC today? Maybe it will. But so might violent movies, Rap music, and Grand Theft Auto. Liberals who once abhorred such logic after the mass shooting at Columbine High School, seem all to ready to embrace the anti-free speech claptrap when it comes to a stupid joke by Trump.

And let’s be perfectly clear. It was a joke. It was not a particularly funny joke, or very “presidential,” as we once defined that word, but it was a joke.

At this point, we are all fully aware of when the president wants to be malevolent. The whip of his wrath is well known to those who have been on the receiving end of it. The original video footage he retweeted was itself a bit of self-mockery between Trump and McMahon, his longtime friend. Though it hardly bears repeating, McMahon’s WWE is fake and the moment clearly reflects that. Though it might be news to Eddie Glaude Jr., none of the cheering fans in that arena actually thought Mcmahon was in real danger and I’d venture to bet that the moment didn’t lead to an outburst of violence against other helpless billionaires like him.

And then there is the particularly outlandish trope that because the video appears to have originated with an anti-Semitic troll on Reddit, that somehow casts a shadow on Trump. Maybe Trump is even complicit by promoting anti-Semitic dog whistle. We’ve seen this argument in the past.

This too is laughable.

The video itself is carries no anti-Semitic content and unless you believe Trump found it from the original source and was deliberately trying to promote that source, it is a leap too far. Hitting Trump for promoting anti-Semitism with this tweet is akin to slamming vegetarians because guess what, Hitler was a vegetarian too!

Now, while I’m no Sherlock Holmes, what seems more likely to me is that the president saw a video online. He thought it was funny. He tweeted it. But maybe that’s wrong. Someone should ask Trump’s Jewish daughter, Ivanka, what she thinks.

The true tragedy of course, is that there are real issues. The latest on health care, fourth of July security threats, is anything going on in Syria? Is tax reform still a thing? What is Robert Mueller up to these days? Who knows? I don’t. And that’s partly because I have been drowning in seas of digital ink considering the ins and out of Wrestlemania and how much blood may or may not have been on Mika Brzezinski’s face during a recent visit to Mar-a-Lago.

For the media to have credibility on real issues, we all need to get away from the tweets and stop making grand pronouncements from them. Yes, we know we cover them too, but that’s only because our job is to cover the rest of you clowns.

Whether it’s taco bowls or Wrestlemania, sometimes a joke is just a joke and when people wake up one day and ask when exactly health care went off the rails or how we got into a nuclear war with North Korea without anybody noticing — I hope you’ll remember the URL to this humble take.