Who is Charlie Gard? Trump Reaches Out to Stricken Family

Who is Charlie Gard? Trump Reaches Out to Stricken Family 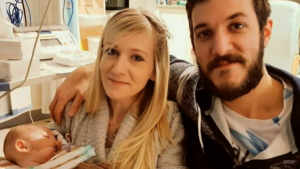 On Monday morning, President Trump tweeted about “little #CharlieGard,” which is an unfamiliar name to many Americans.

If we can help little #CharlieGard, as per our friends in the U.K. and the Pope, we would be delighted to do so.

As it turns out, Charlie Gard is an 10-month-old baby boy in London who is in a fight for his life, legally and physically.

Gard’s parents Connie Yates and Chris Gard heard of treatment in the U.S. that might help, and started a GoFundMe account that raised  £1.3 million. to get him there. However, in March the Great Ormond Street Hospital, where baby Charlie is now, wanted to turn his ventilator switch off and allow him “die in dignity.”

A British court sided with the hospital. The relentless parents appealed that decision, where again, they lost. Connie and Chris have been buying time ever since. They even sought help from the Britain Supreme Court and the European Court of Human Rights. But in the end, the ventilator was scheduled to be switched off June 30. The parents managed to secure a few more days to say goodbye to their son, which is the window of time baby Charlie is now in.

President Trump follows Pope Francis in offering support. Pope Francis said the parents should “accompany and treat their child until the end.”