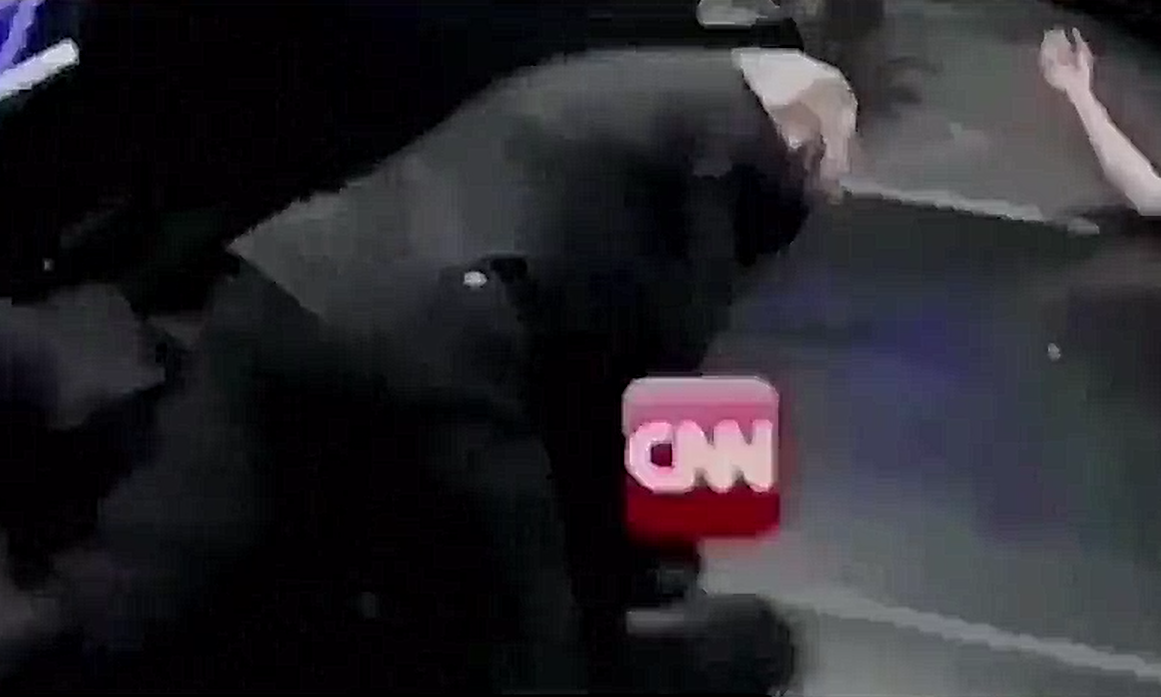 There has been no word on whether Duane “The Rock” Johnson has officially withdrawn his name from a future bid for the White House as he has hinted he could run, but after spending so many years “inciting violence” with his “disgusting” behavior inside a professional wrestling ring, could the American people actually consider such a hate-filled, horrible individual anyway?

Most of you probably thought it would be impossible for President Trump to top his brilliant tweet about “low IQ” Mika Brzezinski and her “face lift” but somehow, the master of Twitter insults was able to step up his game with another hilarious tweet about giving CNN a well-deserved fake beat down. And the media has remained in complete freak out mode.

On ABC’s This Week on Sunday, a panel of very concerned journalists gathered around a table and pretended to be outraged over the President’s latest tweet.

CNN contributor Anna Navarro, by far the angriest of the group, said that the President was “inciting violence against the free press” and “he is going to get somebody killed in the media.”

Politico Washington correspondent Anna Palmer expressed her concern over Trump’s decision to send the tweet so soon after the shooting of GOP congressman Steve Scalise and Politico senior writer Jake Sherman added, “I know a lot of people at CNN who have to be scared.”

Sherman did not mention any names or say why certain individuals would have to be more scared than others. After all, Trump’s tweet depicted the President pummeling a CNN logo, not anyone specific.

No one on the panel expressed outrage over the Shakespeare in the Park recreation (co-sponsored by CNN parent company Time Warner) of Julius Caesar where the embattled Roman Emperor was made to look like Donald Trump before being repeatedly stabbed in the back. But that’s “art,” I suppose.

Finally, host Martha Raddatz posed the question, “What do Americans think when they look at that?”

Glad you asked Martha. Here is what Americans think.

Normal people think of only a few things. The first is that the President should probably stop with tweets like this and focus strictly on governing and policy.

The other is that it was funny. It only takes two seconds to send a tweet. It is his way of going around the hostile media and directly reaching the American people. It’s simply no big deal and, with all the truly violent and hate-filled rhetoric out there, much of it directed at the President, what could be less likely to incite violence than a silly, light-hearted tweet about wrestling?

The latest wrestling tweet was particularly appalling to the sophisticated, polished and highly educated members of the media because it combined the two things that repulse them the most – Donald Trump and professional wrestling (which some view as the ultimate hillbilly, redneck, slack-jawed yokel, racist, homophobic, marry your cousin, NASCAR loving, Bible thumping endeavor). Basically, the people who put Trump in the White House (in their minds).

They can’t understand how someone would prefer to go to a college football tailgate, a car race or watch men pretending to be crazy characters pretend to beat each other up rather than go to an East African lesbian poetry reading in Greenwich Village. They’re so uncultured!

Wrestling is fake, you know? They prefer real life stuff like Hollywood movies and Shakespeare in the Park. The media will never understand the Trump voter and they don’t want to. It’s beneath them.

They are disturbed by the fact that Trump even took part in something like professional wrestling. He should be doing more “presidential” things like “slow jamming the news.”

They also don’t understand how the mind of someone like Trump works. The more they condemn his tweets, the more he will do it. He feeds off the tears of hyper-sensitive liberals. And the eating lately has been really good.

Anna Navarro said of Trump’s tweet, “It is incitement to violence! Let us not parse words! Let us not call it by any other name!”

You can call it by many other names. Funny just being one.