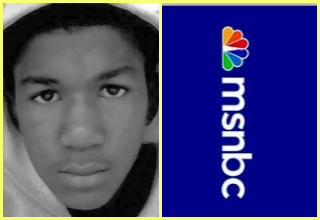 Two words we hear often in cable news. What’s the narrative (insert network) is pushing today? This week? This month?

So as breaking news, big news—Boston bombings, Cleveland kidnapping, Oklahoma tornado—subsided as May turned to June, the narrative (outside of the scandal of the week) is now about an event that actually appears on a schedule ahead of time…as all the cable networks are now counting the hours down to tip-off of the Trayvon Martin trial.

Headline News (HLN) showed producers and execs alike that owning coverage of one trial can be the difference between 2nd (behind Fox) and 4th place in the four-horse cable news race. So while HLN made big gains courtesy of the Jodi Arias trail, MSNBC—absent a narrative if its own—dropped to a distant fourth.

As advertised, MSNBC is the place for politics. For the most part, the network openly supports the President and his agenda. And when Mr. Obama’s credibility was forever tainted thanks to several Nixonian abuses of power (IRS, AP, DOJ/James Rosen, NSA/Verizon), the Lean Forward network was forced to bend over backwards to defend the likes of the IRS…which isn’t too dissimilar to having Bernie Madoff’s back.

So without an election for MSNBC to demonize Republicans and speculate on, the network needs to find a narrative to own.

But understand this: MSNBC doesn’t exactly plan to cover this trial in any traditional news sense. Instead, this will be a nightly campaign against the defendant, George Zimmerman, in the same manner the network campaigned for President Obama against Gordon Gekko (aka Mitt Romney in 2012).

And we’ve already seen a preview of what’s to come.

Reverend Al Sharpton, MSNBC’s 6:00 PM host of Politics Nation, not only covered the Trayvon case when the story broke last year, he actually led a large rally on behalf of the deceased. On one night back in 2012 alone, he marched at 5:00 PM, hosted his show at 6:00 PM (which included an interview with Martin’s parents, whom Sharpton has a close relationship with) and solicited donations for Trayvon’s cause immediately following the show at 7:00…complete with writing a $25.00 check to start the process.

OK, so Sharpton might not be an objective witness, but perhaps Touré will provide the kind of lucid perspective viewers are looking for…

Last year, the quad-co-host of The Cycle went ballistic on CNN’s Piers Morgan because he had the audacity to book George Zimmerman’s brother (Robert) in an effort to hear his perspective.

Another viewpoint? Two sides of a story?

For a one-note singer like Toure, that’s a foreign concept…

Fine. Maybe Lawrence O’Donnell can apply his wisdom to the case…except that—even before an opening statement in the trial—he’s already accused police of a Simpsonian cover-up.

By the time this trial is done, one thing is for certain:

MSNBC—who plays the race card from the bottom of the deck on an almost-daily basis—will attempt to set race relations back in this country anywhere from 60-160 years.

Of course, most sane individuals would dispute such an accusation, but let’s consider the messengers here. In the minds of Bashir and Matthews, the IRS scandal was invented by eeeevil white Republicans because—after five years—they still can’t comprehend that a black guy sits in the Oval Office. On their planet…the GOP made the whole IRS thing up because they don’t know how to beat Democrats in elections, and besides, they’re all racist and stuff.

Remember…the combined age of the two men who actually are taking this position is 117 years old.

But MSNBC has the resources of NBC News to provide a straight journalism balance to all those zany opinions, right? Well, in this case that would be true if The Today Show hadn’t aired a doctored 911 call where Zimmerman is portrayed as a racist. Problem is…the edited version leaves out the middle of the call that provided context, when a 911 dispatcher specifically asks Zimmerman to describe Trayvon’s race. The network got around to apologizing three days after the deceptive edit was discovered. Zimmerman since decided to sue the network over the edit.

Despite all of this, MSNBC says it wants to own the Trayvon trial narrative.

A narrative that won’t be about guilt, innocence or justice…

But about race, bias, and outright advocacy.