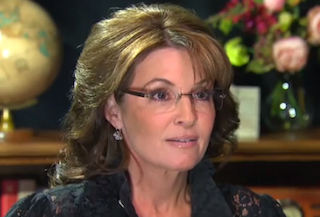 Sarah Palin is not prone to public apologies, but Wednesday night she decided to clarify comments she made to CNN’s Jake Tapper about Pope Francis I on her Facebook page.

“I apologize for not being clearer in my response,” wrote of her remarks, “thus opening the door to critical media that does what it does best in ginning up controversy.” Her comments about the Pope drew attention, especially after CNN posted them online under the headline “Pope Francis too liberal for Palin?”

“He’s had some statements that to me sound kind of liberal, has taken me aback, has kind of surprised me,” Palin told Tapper. But even in that case, she questioned whether the reports she was reading were true or if the media was creating a narrative that does not reflect the new Pope’s true beliefs. “I’m not one to trust the media’s interpretation of somebody’s message,” she said.

Just to clarify my comment to Jake Tapper about Pope Francis, it was not my intention to be critical of Pope Francis. I was reminding viewers that we need to do our own homework on news subjects, and I hadn’t done mine yet on the Pope’s recent comments as reported by the media. Knowing full well how often the media mischaracterizes a person’s comments (especially a religious leader’s), I don’t trust them to get it right when it comes to reporting on the Vatican. I do, however, trust my many Catholic friends and family, including some excellent Catholic writers, who have since assured me that Pope Francis is as sincere and faithful a shepherd of his church as his two predecessors whom I admired. I apologize for not being clearer in my response, thus opening the door to critical media that does what it does best in ginning up controversy.