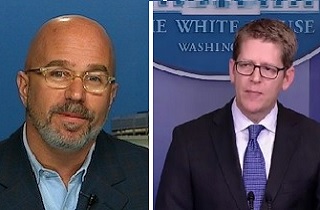 Since former President Bill Clinton weighed in on President Obama‘s “Keep Your Plan” promise earlier this week, dueling political media narratives have evolved as to whether Clinton’s admonition was an indication of friction between the two. On Thursday morning, White House Press Secretary Jay Carney employed some deft spokesman kung-fu on radio host Michael Smerconish, refusing to reveal details of a telephone call between the two POTUSes (POTI?), but seemed to quasi-confirm that the two have spoken since Tuesday.

“I don’t have any calls between the two presidents to read out,” Carney replied, the standard boilerplate for this type of question, adding “They speak very frequently. Former President Clinton has been enormously supportive of the Affordable Care Act, and I know how this works, having been a journalist for 21 years, but if you look at that interview, everything he said about the Affordable Care Act was positive, including we are better off without.. I mean with it than without it.”

He continued, “President Clinton knows of what he speaks. He, like many presidents before him, fought to reform the health insurance industry in this country. That was a hundred-year effort that succeeded for the first time when the President passed the Affordable Care Act.”

Carney haltingly replied “Well, again, I can’t publicize every phone call the President has, he has a lot of conversations with a lot of people, lawmakers, foreign leaders, former presidents, but what I can tell you is President Clinton has been very supportive of the Affordable Care Act, and I think you’ve seen him, again and again and again, say so.”