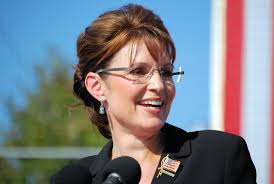 Sarah Palin unloaded on the “spineless pundits” who criticize Donald Trump, posting an essay today on Facebook that praised the “bold, non-politician candidate” for his recent proposal to ban Muslims from entering the United States.

“Herd mentality running rampant with hypocritical and/or naive pundits trying to crush Donald Trump because he’s committed to clobbering the bad guys,” Palin wrote, declaring her support for Trump’s proposal. Palin, who in 2009 said she’s “all for” profiling Muslims, added:

“When information shows someone comes to America after being in a radical Islamic stronghold, and embraces the Death Cult’s ideology that mandates butchering the innocent – then we are right in calling for shucking the political correctness that is fundamentally transforming America, and finally putting the security of innocent Americans FIRST.”

Palin went on to insist “Trump’s idea isn’t new,” noting “the Feds have always banned whomever they choose from entering the U.S., they have the ability, we’ve given them the right, and they have a track record proving it.” She suggest “hypocritical” liberals praised President Jimmy Carter when he “rounded up Iranian students” and “targeted a populace based on religious ideology.”

“While the media twists and turns words, conservatives who propose action to combat the real threat facing America are demonized while the namby-pamby milquetoast politicians get a pass to go along their unaccountable merry way,” Palin added.

Palin also affirmed her support for Liberty University President Jerry Falwell, Jr., who advised students last week to get their concealed weapons permit to prevent the next San Bernardino massacre. “That’s commonsense, which is why his courageous, wise advice is now attacked,” Palin wrote.

The former vice presidential candidate concluded her message with advice to her followers, telling them to “ignore the White House” when it “spews talking points” about Trump being “unAmerican.”