Politicians Are Using More Profanity In Public, And It’s About F**king Time 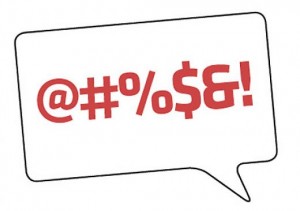 [DISCLAIMER: For fairly obvious reasons, there is language contained in this post that you may find objectionable.]

Last week, New York mayor Michael Bloomberg was celebrating the Fourth of July by helping kick off a hot dog-eating contest. As he was reading through all of the truly cringeworthy puns in his prepared speech, he remarked to the crowd, “Who wrote this shit?” It got a few laughs from the audience, and no one thought much of it.

But could this be part of a worrying trend? The Associated Press highlights Bloomberg’s mini-shitstorm as one of several recent examples of politicians feeling more free to swear in public. The piece also makes note of New Jersey governor Chris Christie‘s occasional use of profanity and Philadelphia Mayor Michael Nutter using the word “asshole” to describe a teenager responsible for a recent school shooting.

Somehow in the 21st century, this is still an issue. I’m just going to ask: what exactly is the big fucking deal with profanity? I have genuinely never understood the outrage over profanity. Obscenity and indecency, sure. But profanity is just words. Yes, it would obviously be preferable if children didn’t go around acting like Jersey Shore extras, but are we really the kind of society that has to gasp as one when the vice president says “big fucking deal”? Yes, I would think if you were in his position, you would have similar thoughts. Rick Santorum, of all people, told a reporter his distortions of Santorum’s words were “bullshit.” Rick Santorum, a man whose name is almost synonymous with conservative family values, didn’t think it was a big deal to share his unfiltered thoughts with a member of the press.

Now, the only reason this is a big deal is because somehow, it’s beneath the office of any political figure to swear. I would counter that profanity makes politicians seem more human. Every time I hear someone say “fudging” or “shut the front door” or similar language, it makes me wince. We all know what you’re trying to say. We’re adults. We have HBO. We know the score. If guys like Bloomberg and Christie feel more in their comfort zone using language like that, I say, go for it!

Now we come to the inevitable counterargument, which is always some variation of “what about the children?” Well, these are politicians we’re talking about. When politicians talk about the issues, it’s pretty obvious their target audience isn’t children. And people and organizations whose target audiences are adults shouldn’t be so concerned with unfiltered profanity. Now, of course, there are young people who are more active than others and they will see a little profanity scattered across the internet, whether it’s censored or not.

There are good ways to deal with those situations, and there are bad ways. For example, a California teenager who founded the “No Cussing Club” sent a “cuss jar” to Biden after his BFD slip. He explained to CBS, “Words have a lot of power and that was one word that obviously offends people and people don’t like.” That would a bad way of dealing with it. Trying to get the rest of us to censor ourselves because some people are offended by a few words is beyond ridiculous. I’m not saying people should be shooting their mouths off every time they call a press conference, but we don’t have to be so anal about it when they do.

Words are the purest expression of ideas. Sometimes we say things without first running them through a filter. Politicians are humans, humans aren’t perfect, and trying to make us act that way is just a big fucking waste of time.