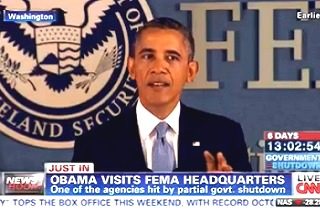 Although he had no public events scheduled for Monday, President Obama took time to deliver pointed remarks to the staff of the Federal Emergency Management Agency (FEMA) this afternoon, thanking the agency for maintaining emergence preparedness in the face of the current government shutdown, and placed the blame for FEMA’s potential difficulties squarely on Republicans.

In pool-only remarks at FEMA headquarters this morning, the President ostensibly thanked staffers for preparations surrounding now-dissipated Tropical Storm Karen, but the unscheduled stop seemed more designed as an opportunity to deliver yet another example of the potential harm of the current government shutdown, and to chide House Republicans for their failure to allow a vote on a clean continuing resolution. He described Karen as a bullet dodged, and noted that FEMA’s “job has been made more difficult. Thanks to the folks at FEMA, we were prepared for what might have happened down in Florida. Nevertheless, the government is still shut down. services are still interrupted. and hundreds of thousands of hard working public servants, including many FEMA professionals are still furloughed without pay, or they’re not allowed to work at all.”

He then reiterated the message that “I have said from the start of the year, that I’m happy to talk to Republicans about anything related to the budget. There’s not a subject that I’m not willing to engage in, work on, negotiate and come up with common sense compromises on. What I’ve said is that i cannot do that under the threat that if Republicans don’t get 100% of their way, they’re going to either shut down the government or they are going to default on America’s debt.”

“The House should hold that vote today,” the President added. “If Republicans and Speaker Boehner is saying there are not enough votes, then they should prove it. Let the bill go to the floor and let’s see what happens. Just vote.

Here’s video of the President’s remarks, via CNN:

Full Transcript (via email from The White House):

THE PRESIDENT: I’m here at FEMA for a couple of reasons. First of all, I want to thank Craig Fugate and his entire team, and the incredible workers who are here at FEMA. They are having to, under less than optimal situations, still respond to Mother Nature, which doesn’t stop just because the government has shut down.

I wanted to get initially a briefing on what had happened with Hurricane Karen, became Tropical Karen, and then fortunately dissipated, so we dodged a bullet there. In the meantime, we’re on tornado watch here in the Mid-Atlantic states because of severe weather patterns. And we’ve got blizzards up north, we’ve got some weather patterns in the middle of the country that we’re still monitoring. And so I just want to say thank you to all of you for the incredible work that you’re doing.

I think it’s important to understand that the people here at FEMA have been doing everything they can to respond to potential events. Here at FEMA, they’re in touch with their state and local partners in case resources are needed. FEMA remains prepared for natural disasters year around, with supplies pre-positioned in distribution centers across the country.

But their job has been made more difficult. Thanks to the folks at FEMA, we were prepared for what might have happened down in Florida. Nevertheless, the government is still shut down, services are still interrupted, and hundreds of thousands of hardworking public servants, including many FEMA professionals, are still furloughed without pay, or they’re not allowed to work at all.

So Craig was just explaining to me here at FEMA — about 86 percent of the FEMA workforce is furloughed. In response to the potential event that might have happened down in Florida and along the coasts, Craig called back 200 of those workers. Keep in mind, calling them back doesn’t mean they were getting paid, it just means they had the privilege of working without pay to make sure that they were doing everything they can to respond to the potential needs of their fellow citizens.

Now that this particular storm has dissipated, Craig is going to have to re-furlough at least 100 of those folks who were called back. So think about that. Here you are, somebody who’s a FEMA professional dedicated to doing your job; at a moment’s notice you’re willing to show up here in case people got in trouble and respond to them, even though you’re not getting paid, even though you don’t have certainty. And now you’re being put back on furlough because the government is shut down. That’s no way of doing business.

That, by the way, just speaks to the day-to-day emergencies that may come up and that is FEMA’s job to respond to. Craig was also explaining the fact that when it comes to training first responders, for example, we have on a weekly basis already scheduled training for first responders that now have to be rescheduled. It will probably end up ultimately costing the government more money for us to put those things back together again. And so not only is this shutdown hurting FEMA workers, not only is it making it more difficult for us to respond to potential natural disasters, but it may actually end up costing taxpayers more than it should.

Right now, Congress should do what’s in the best interest of the economy and the American people, and that’s move beyond this manufactured crisis and work together to focus on growth, jobs, and providing the vital services that Americans all across the country depend on, including the services that FEMA provides.

I heard a lot of talk over the weekend that the real problem is, is that the President will not negotiate. Well, let me tell you something — I have said from the start of the year that I’m happy to talk to Republicans about anything related to the budget. There’s not a subject that I am not willing to engage in, work on, negotiate, and come up with common-sense compromises on.

What I’ve said is that I cannot do that under the threat that if Republicans don’t get 100 percent of their way, they’re going to either shut down the government or they are going to default on America’s debt so that America for the first time in history does not pay its bills. That is not something I will do. We’re not going to establish that pattern.

Now, the other thing I heard over the weekend was this notion that Congress doesn’t have the capacity to end this shutdown. The truth of the matter is there are enough Republican and Democratic votes in the House of Representatives right now to end this shutdown immediately, with no partisan strings attached. The House should hold that vote today. If Republicans and Speaker Boehner are saying there are not enough votes, then they should prove it. Let the bill go to the floor and let’s see what happens. Just vote. Let every member of Congress vote their conscience and they can determine whether or not they want to shut the government down.

My suspicion is — my very strong suspicion is that there are enough votes there. And the reason that Speaker Boehner hasn’t called a vote on it is because he doesn’t, apparently, want to see the government shutdown end at the moment unless he’s able to extract concessions that don’t have anything to do with the budget. Well, I think the American people simply want government to work. And there’s no reason that there has to be a shutdown in order for the kinds of negotiations Speaker Boehner says he wants to proceed. Hold a vote. Call a vote right now, and let’s see what happens.

This is something routine. It’s been done more than 40 times since Ronald Reagan was President. It has never before been used in the kind of ways that the Republicans are talking about using it right now. We can’t threat an economic catastrophe in the midst of budget negotiations.

So authorize the Treasury to pay America’s bill. Pass a budget, end the government shutdown, pay our bills, and prevent an economic shutdown.

And as soon as that happens, I am eager and ready to sit down and negotiate with Republicans on a whole range of issues: How do we create more jobs? How do we grow the economy? How do we boost manufacturing? How do we make sure our kids are getting a first-class education? All those things will be on the table. I’m happy to talk about health care; happy to talk about energy policy; how do we deal with our long-term fiscal situation.

All those things I’ve been eager and anxious to talk to Republicans about for the last seven months, and I’ve put out a budget that specifically lays out my vision for how we’re going to grow this economy. And I expect the Republicans should do the same, and we can negotiate it. But we shouldn’t hurt a whole bunch of people in order for one side to think that they’re going to have a little more leverage in those negotiations.

Last point I’m going to make: The bill that is being presented to end the government shutdown reflects Republican priorities. It’s the Republican budget. The funding levels of this short-term funding bill, called the CR, is far lower than what Democrats think it should be. Nevertheless, Democrats are prepared to put the majority of votes on to reopen the government. So when you hear this notion that Democrats aren’t compromising — we’re compromising so much we’re willing to reopen the government at funding levels that reflect Republican wishes, don’t at all reflect our wishes.

For example, here at FEMA, they’re still subject to the sequester, so even before the shutdown they were having trouble making sure that everybody was staying on the job and fulfilling all of their various functions. We need to get that sequester lifted that’s been hanging over the head of the economy and federal agencies during the course of this entire year.

This short-term legislation to reopen the government doesn’t even address that. That has to be done in a broader budget framework.

So Democrats have said we are willing to pass a bill that reflects the Republicans’ priorities in terms of funding levels. That’s a pretty significant compromise. What we’re not willing to do is to create a permanent pattern in which unless you get your way the government is shut down or America defaults. That’s not how we do business in this country, and we’re not going to start now.

So, again, I want to thank everybody at FEMA here for the extraordinary work that you’re doing. You show each and every day that you take your responsibilities seriously. You do your jobs with consummate professionalism. And hopefully you’re setting a good example for members of Congress. They need to be doing the same thing. And if they do, then there’s no reason why we all can’t move forward and make sure that we’re taking care of America’s business.

Thank you very much, everybody.