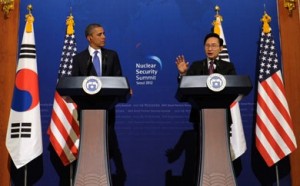 President Obama is in South Korea today to attend a summit on nuclear security, and during an earlier a joint news conference with President Lee Myung-bak, he called on the nation of North Korea to call off its plans to launch a longe-range rocket next month. Obama noted at the news conference that after his observations of North Korea via the demilitarized zone, “it’s like you’re looking across 50 years into a country that has missed 40 years or 50 years of progress.”

RELATED: Report: North Koreans Are Being Questioned, Punished For Not Having Grieved Enough

According to FoxNews.com, the United States and other countries are concerned that North Korea launching a satellite using a long-range rocket would be in violation of a U.N. ban on nuclear and missile activity because of the implication of the technology. Obama warned that sanctions against North Korea may be tightened if they go forward with the plan, and called out not just North Korea, but China for not taking any action on its Asian neighbor.

“Bad behavior will not be rewarded. There had been a pattern, I think, for decades in which North Korea thought if they had acted provocatively, then somehow they would be bribed into ceasing and desisting acting provocatively…

“What I’ve said to [China] consistently is rewarding bad behavior, turning a blind eye to deliberate provocations, trying to paper over these not just provocative words but extraordinarily provocative acts that violate international norms, that that’s not obviously working.”

The United States has been involved in talks with China, Japan, Russia, South Korea, and North Korea on ending part of North Korea’s nuclear program. The president also spoke to U.S. troops in the area, praising them for serving at “freedom’s frontier.”