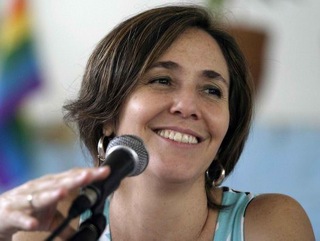 Cuba’s First Daughter of the Revolution, Mariela Castro, daugher of Raul, is making a trip into El Imperio™ to visit New York and San Francisco and talk about gay rights. This thanks to the federal government granting her a visa for academic conferences and talks in the nation, something that many Republicans– most prominently, Sen. Marco Rubio— has called the President out for.

According to the Miami Herald, this mission in the States is an academic one:

The daughter of Cuban President Raul Castro has been granted a U.S. visa to attend an academic conference in San Francisco and another event, one of her associates confirmed Thursday. The decision has already drawn fire from Cuban-American politicians and on anti-Castro blogs, which argue that she is an apologist for the Communist government her family has led for decades. […]

Castro received a visa from the U.S. State Department and will chair a panel on the politics of sexual diversity at a gathering in San Francisco next week organized by the Latin American Studies Association, an official at her institute told The Associated Press. The official spoke on condition of anonymity because she was not authorized to discuss the matter. The Web site of the New York Public Library says Castro is also scheduled to talk there on May 29.

Hot Air notes that many of the most prominent Cuban-Americans, including Democratic Sen. Bob Menendez, have criticized the decision to let a Cuban government official come and speak, de facto on behalf of the government. Republican Sen. Marco Rubio released the following video, calling the decision “outrageous” and “an enormous mistake”:

Many will harp on the fact that President Obama handed out a visa to the family of a cruel, oppressive dictator, to advocate for political change in America as if there wasn’t anything to fix over in Cuba. This is the sort of missing the forest for the trees that can sink a very valid, very important discussion on the way the extreme left disguises its original stances on social issues. Yes, many evil people have been let into America’s marketplace of ideas– who could forget Mahmoud Ahmadinejad‘s New York City adventure?– and it enriches us to always have more information in the public sphere, not less. This does not diminish the hypocrisy of a representative of the Castro regime in promoting gay rights. The Revolution Mariela Castro represents is one where LGBT folk were put before firing squads, where men could go to jail for having long hair. The idea that she would have anything of value to add to a discussion on civil rights in a regime actively condemning their existence is the story here– not the opportunity Americans now have to mock it.