Romney On Past Remarks Invoking Rev. Wright: Not Sure What I Said ‘But I Stand By’ It, ‘Whatever It Was’ 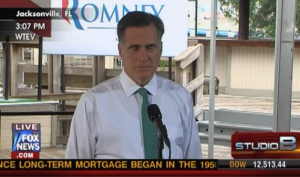 Mitt Romney was quick to “repudiate” any plans one super PAC may have to dig up the Rev. Jeremiah Wright controversy. Asked about it his past remarks regarding Wright, Romney said he’s “not sure” what he said, but “I stand by it.” The comment in question took place back in February on Sean Hannity‘s radio show.

About his past words, Romney — at a campaign event in Jacksonville, Florida — said:

“I’m not familiar precisely with exactly what I said, but I stand by what I said, whatever it was. […] I’ll go back and take a look at what was said there.”

During the Hannity interview, Romney was responding to a clip Hannity aired, in which President Barack Obama said: “Given the increasing diversity of America’s populations, the dangers of sectarianism are greater than ever. Whatever we once were we are no longer a Christian nation.”

Look, he may not be much of a student of history but perhaps he doesn’t recall that from the very beginning, America had many different sects, many different religions, that part of our founding principle was that we would be a nation of religious tolerance. Also, without question, the legal code in this country is based upon Judeo-Christian values and teachings, Biblical teachings, and for the president not to understand that a wide array of religions, and a conviction that Judeo-Christian philosophy is an integral part of our foundation, is really an extraordinary thing.

He continued his response, invoking Wright:

I think again that the president takes his philosophical leanings in this regard, not from those who are ardent believers in various faiths, but instead from those who would like to see America more secular. And I’m not sure which is worse, him listening to Reverend Wright or him saying that we…must be a less Christian nation.”

Take a look at both Romney comments below — first today’s, followed by the Hannity interview: