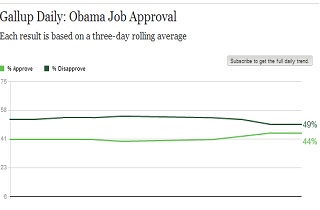 The Department of Health and Human Services announced on Sunday that almost a million people enrolled in Obamacare through Healthcare.gov from Dec. 1 – Dec. 24, bringing the total of people to enroll in private insurance through federal exchanges to at least 2.1 million since the law took effect in October, plus an additional 3.9 million who have been deemed eligible for Medicaid. Over the next week or so, final enrollment figures from state exchanges could take that number even higher.

…Obama’s improved poll numbers also reflect the fact that Obamacare is working. Enrollment surged in December, and yesterday HHS announced that 6 million people now have healthcare coverage thanks to the ACA. The negative stories about a glitchy website have been replaced with millions of Americans getting access to affordable healthcare.

That’s entirely possible, but its also possible that, with a huge holiday news dead zone, no news was good news for the President. These numbers are based on a rolling average, and only include the period between Dec. 21-Dec. 29, so it will be interesting to see how this trend holds as the news revs up its motor again. If nothing else, though, this result does seem to demonstrate the influence of the mainstream media on public opinion.